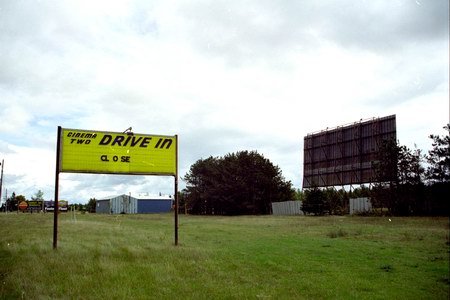 The Cinema Two Drive-In was opened June 9, 1953 with Kathryn Grayson in “The Desert Song”. It was later operated by Delft Theatres and later by Bill Giles. It was closed in 2001. The ozoner listed a car capacity at 350 with a single screen. It is used for special screenings and events during the summer.

Schoolcraft County’s first drive-in formally opened on June 9, 1953, according to the following day’s report in The Escanaba Daily Press. Owner J. L. LeDuc also operated the Cedar and Oak Theatres in Manistique. His intention was to leave the Cedar Theatre closed during the summer months while the US-2 Drive-In was in operation. The new drive-in could accommodate 350 cars.

After more than a decade of inactivity, the drive-in (now referred to as the Manistique) was open twice in 2016 for charity events. The Escanaba Daily Press reports they’re at it again.

“The Schoolcraft Tourism and Commerce will be showing Jurassic Park and Voyage to the Prehistoric Planet on Saturday, July 15, at the Manistique Drive-Inn theater.” Free admission, and concession sales benefit St. Francis de Sales School in Manistique.

WLUC, Upper Michigan’s News Leader, ran a story about the Manistique in September 2016. The report is now on YouTube.

It may be that the Manistique has been quiet for a while now. The most recent event I could find was a scary triple feature on Oct. 28, 2018, as shown on the U.S. 2 unofficial Facebook page.

Two weeks later, a GoFundMe page launched with videos and a few details. “The Upper Peninsula Film Union with the help of mBank has been able to temporarily remove the drive-in from the market but we still need to raise funds to secure it permanently,” it said. “We really need funds soon to continue the work we have started, preserve and secure the the property and start getting ready for another fun season of drive-in events in 2019.”

There are still more details in the description of a short YouTube video that was posted in July 2018. “April and Jason Collins own the property on U.S. 2 and have allowed Don Erickson and Eric Sherbinow of the U.P. Film Union to produce movie events that bring back the bygone days of the drive in theater.”

Here’s hoping those U.P. folks can keep it going and eventually restore this drive-in.

So here is the official story on the U. S. 2 Drive In Theater: For the last few years a couple of foolish guys with clearly too much time on their hands, who love movies and drive in theaters have been holding free community movie events at this theater. Eventually we named ourselves the Upper Peninsula Film Union. We find sponsors to pay for the licensing and we let local nonprofits operate the concession stand so they can raise money for their cause.

It’s a big win for everyone. This old drive in has been for sale for many years and in the spring of 2018 it was nearly sold to a logging operation that would have use the property as a log storage yard. This would have been a real tragedy since this is the last standing drive in theater in Michigan’s Upper Peninsula. As we were nearing the end of the 2018 movie season we decided to go ahead and approach a bank to see if we could finance the purchase of the property.

We formed a 501©3 nonprofit as the Upper Peninsula Film Union and went to talk to the president of a local bank. He was very aware of what we had been doing at the drive in for the last few years and thought it was wonderful. He was fully on board with the idea of the Film Union saving the drive in and we worked out a very good deal. Of course we still have to pay the loan back but we believe with future fundraising efforts and donations we will be able to do that in time.

The concession stand was in terrible condition and over the winter we have put a lot of work into it. It is far from done but the interior is getting close to completion. The exterior and the rest of the property is next on the hit list. Once the interior of the concession is complete we will start to kick the fundraising machine into gear.

We wanted to wait until we had something to show off. We have decided that we will use the original U. S. 2 Drive In name instead of the more recent Cinema 2 name (there was a theater downtown called Cinema 1 owned by the same person several years ago, that theater no longer uses that name so the Cinema 2 idea isn’t as clever as it once was).

While we are not remodeling it to look like it originally did we are going for a look that would have been typical in the year it was built (1953). We will not be using the malt shop look that everyone doing something with a 50’s look seems to do. This is not a malt shop. This is a drive in theater and everything will not be red, white, black and chrome.

Anyway, we have saved this theater from a very sketchy fate. We have kicked off the 2018 season with our first show on the 29th of June. Our next will be on the 27th of July. We only host 3 or 4 events per year because we know that if we did more the numbers of people attending each show would dwindle.

Plus it would be impossible to find sponsors for more events. On top of that we are volunteers with lives and jobs and we don’t take a penny for what we do at the drive in. We do also host a monthly film club in the concession stand of the drive in. 6 to 12 people get together and we watch a randomly chosen film inside a cool, old drive in concession stand and then discuss the movie afterward.

It is always a good time. Sorry for the long-winded blab. If you want to help us save this sole survivor of the Upper Peninsula’s cinema bygone years please find the U. P.

Film Union on Facebook. You can be made aware of upcoming events there and find the link to our GoFundme. Thanks for taking a moment to read this!.