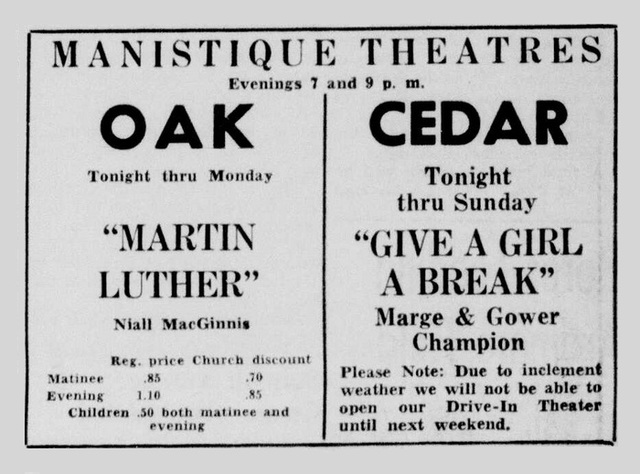 This was the only cinema in Manistique when I attended back in the early 50s. It was a nice wood theatre, painted white. My girlfrieds, mother and grandmother and I used to go quite regularly.

The article also says that, until 1942, when it was bought by Mr. and Mrs. J. L. LeDuc, who had bought the Cedar Theatre in 1937, the Oak Theatre had been called the Gero Theatre.

The November 1, 1934, issue of the same paper said that Benjamin Gero had bought the Manistique Opera House in 1908, and had converted it into a full-time movie house in 1916, renaming it the Gero Theatre that year.

An article in the February 22, 1972, issue of the Daily Press said that the town had been without an indoor theater since the Oak had closed in November, 1970. I haven’t been able to discover what became of the Oak Theatre’s building, but I suspect that it has been demolished. There’s nothing resembling it on Maple Street in Google street view.

Map marker is way off. Corner of Maple and Oak is a wasteland of huge parking lots.

Exterior and interior photos of this house can be seen on page 119 of the book Manistique, by M. Vonciel LeDuc (Google Books preview.) The caption says that Benjamin Gero bought the theater in 1904 (apparently incorrect) and changed the name from Hancock Brothers Opera House to Manistique Opera House. It also says that the house was located next door to the town’s earlier Star Opera House.

Editions of the Cahn Guide from around 1910 list it by the name New Opera House, say that it was built in 1904, and that was a ground-floor theater with 800 seats. The guides list Hancock Bros. as the managers. The 1904 construction date makes it more likely that the newspaper article I cited in my previous comment was correct, and Gero took over the house and renamed it Manistique Opera House in 1908, rather than 1904. Both the article and the photo caption in the book say that he renamed it the Gero Theatre in 1916, when it was converted to a full-time cinema.

This item from the Cheboygan Democrat of November 21, 1903, pertains to the closure of the Star Opera House and the intention of the Hancock brothers to replace it with a new theater:

“Manistique’s ‘opera house’ has been sold to the Booth Packing Co., for a fish warehouse, and the place is without a public hall for theatrical entertainments. However, the manager of the old place will have a new opera house ready for Jan. 1, if the people will help him by buying tickets for a grand opening at that time.”

In an article by W. S. Crowe in the June 6, 1951, issue of The Escanaba Daily Press, Crowe says that he and John Hancock built the Manistique Opera House in 1903, so perhaps they did manage to meet their goal of opening the new theater on January 1, 1904. The rather austere facade in the vintage photos suggests that the building was designed by its builder rather than by a professional architect, and it was probably built quickly and at minimal expense, and likely had a fairly plain, utilitarian interior.