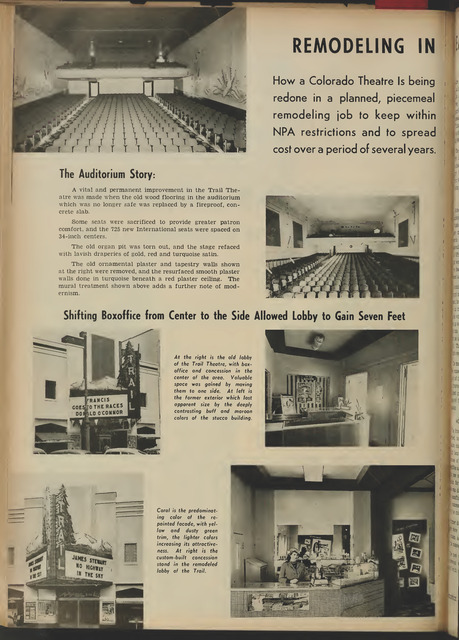 This theatre originally opened on May 25, 1908 as a vaudeville theatre named Majestic Theater. Movies were part of the program. In 1918 it was renamed America Theatre. It was remodeled in 1937 by the Boller Brothers and was operated by the Cooper Foundation as the Trail Theatre. They were still the operators in 1950. The Trail Theatre was closed in April 1962 and was demolished.

Sorry, but the COLORADO THEATER was only an artist’s conception in the local newpaper. Cooper Foundation, rather than remodeling an aging TRAIL THEATER, instead sold the property to the First National Bank (on the same corner,) and the bank engulfed the whole quarter of the block with a new bank complex. The theater space was a Walgreens Drug store for many years and is now a Fed Ex office.

This article in Boxoffice of June 7, 1952, says that the Cooper Foundation’s original plans to rebuild the Trail Theatre in 1950 were dropped due to building restrictions imposed by the NPA. Instead the Trail was to be remodeled in several phases, the first of which began in late November, 1951, with the house reopening on New Year’s eve.

In addition to the text on the page I linked to, there is additonal text on the subsequent page, and several photos on the previous page.

As of 1952, the Foundation still intended to completely rebuilt the theater, but if boompated is correct that plan was never carried out. We might as weel rename this page for the Trail Theatre, which I can’t find listed at Cinema Treasures. The Boxoffice article said that the building the Trail occupied had been converted into a theater in the early part of the 20th century, and the theater had been remodeled previously, most recently in 1937.

David and Noelle’s list of known Boller Brothers theaters says that the firm designed the 1937 remodeling project, and that the house had been known as the America, Majestic, and Empress Theatre over the years. Boxoffice said that the aborted 1950 rebuilding project was to have been designed by Boller & Lusk, so that firm probably designed the rather limited structural changes for the 1951 remodeling. The interiors for the project were by the Teichert studios.

Seated 810 according to the Film Daily Yearbook of 1942

The April 9, 1962 issue of Boxoffice ran a lengthy article on the closing of the Trail. It relied on a story in the Colorado Springs Free Press.

Highlights: Started as the Majestic in 1910, first with vaudeville, then movies. Changed its name to the Empress until after World War I, when it became the America. Cooper Foundation Theatres picked it up in the mid 1930s. The theater finally became the Trail after remodeling in 1937. Closed “Thursday night” with the movie “Face in the Crowd.” The building was to be razed to make room for an expansion of the First National Bank. The Trail’s seats were to be moved to the Tompkins.