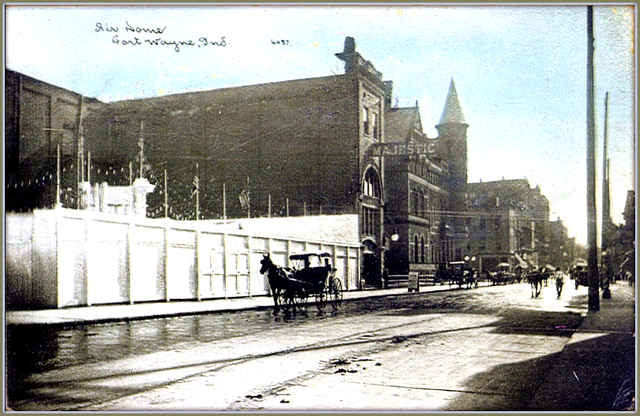 The Majestic Theater is known to have been in operation as late as the 1920’s.

Does anyone know whether this building still exists?

From 1910 a cold wintry postcard view of the MajesticTheater in Fort Wayne.

A history of Fort Wayne published in 1917 says that the Majestic Theatre opened on October 24, 1904. The postcard Don Lewis linked to above also shows the Airdome theater that was tucked into the “L” of the Majestic’s auditorium and entrance buildings.

The facade of the Majestic had been altered by the time this photo was made, perhaps in the 1920s.

The Allen County Public Library also has this interior shot from 1906.

Here is an aerial view of downtown Fort Wayne about 1950, showing the Majestic building at left. The caption identifies it as the Civic Theatre, but Civic was an aka for the Palace Theatre, so the caption is probably in error, unless both the Palace and the Majestic used the name Civic at different times. They probably meant to write Capitol Theatre, though.

Strange, but the billboard says Civic.

I ought to have used the zoom feature on that photo. It does say Civic Theatre above the billboard, and so does a smaller vertical sign over the entrance.

I searched the Allen County photo web site, and can’t find any photos of a Capitol Theatre.

Assuming that the theater was renamed for the company in 1940, and retained that name until the company moved out in 1957, then it couldn’t have been called the Capitol during the period when our introduction currently says it was.

A list of Indiana’s movie theaters available here in PDF format has a Capitol Theatre in Fort Wayne, with the AKA Little Cinema, but the only additional information is that it has been demolished. The Majestic is also on the list, with no AKA’s.

The address for The Capitol Theater would have had to been in the 200 block of East Berry Street if the post card above is accurate. The building to the left of the theater in the picture is the Fort Wayne History Center (old City Hall building) which is located in the 300 block. Of course, the geographic accuracy of post cards in the early 1900’s may be questionable.

If this house was ever called the Capitol Theatre it had to have been after 1957. The sources I cited in my comments of October 10, 2010, and June 28, 2012, show that it opened as the Majestic on October 24, 1904, and became the Civic Theatre from 1940 until 1957. I’ve found no sources saying what became of it after 1957. If somebody knows for sure that it was renamed the Capitol at that time, please let us know. Until we have such a source, I think the page should be renamed either Majestic Theatre or Civic Theatre, though I’ve also found no sources saying that it ever ran movies as the Civic. It’s possible that the Capitol was an entirely different theater.

Perhaps the mysterious Capitol Theatre actually was at 172 West Berry, and Billy, Don and Billy got the number (and the name) attached to the wrong theater because the postcard mistakenly says the Majestic was on West Berry instead of East Berry? Or perhaps Fort Wayne simply changed its numbering system at some time after the postcard was published.

Fort Wayne, by Randolph L. Harte (Google Books preview) gives the location of the Majestic Theatre as 216 East Berry Street, and says that it was demolished in 1957. That means it must never have been called the Capitol Theatre.