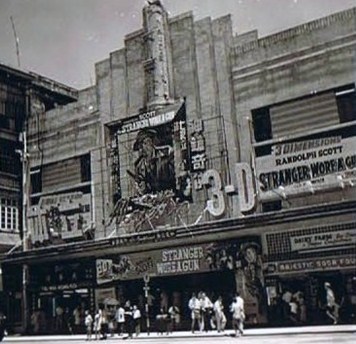 Medium sized theatre situated on Nathan Road, in Kowloon side of Hong Kong. It opened 8th December 1928 with Ramon Novarro in “Ben-Hur:A Tale of the Christ”. It was closed in 1988.

Soon demolished, the new Majestic Cinema was built on the site.

The Majestic Theatre was situated in Yaumati on the Kowloon side of Hong Kong.
Its 1000-seat auditorium with a spacious stage was on the ground floor of the theatre building. It had an attractive main entrance, with a cafe on the right side of the entrance, while a furnished waiting room on the left. according to a news article published by the Hong Kong Telegraph,“ the interior is simply but tastefully decorated, concealed electric lights making the general effect pleasing to the eye."
The theatre was owned by the Hongkong and Kowloon Cinema Company and managed by Mr.C.H.Leung. During its silent films era, films were shown either with orchestra or with interpreter. The spacious stage was placed at the disposal of European travelling companies.
It opened to business on 8th December, 1928 with Ramon Novarro’s Ben Hur.
On 10th December, 1930, Alice White’s Broadway Babies was shown at the theatre, and it was the first talkie to be shown on the Kowloon side of Hong Kong.
Before the outbreak of WWII, it was a second run theatre showing English language films.
After the outbreak of war on 8th December, 1941, the theatre closed temporarily, and as of 14th January, 1942, the theatre had re-opened.
During the war years, only films censored by the Japanese Armies could be shown at the theatre. After the suspension of electricity supply on 20th August, 1944, the theatre was supposedly closed to business. After the restoration of electricity supply, the theatre re-opened at an unknown date in the remaining days of the WWII.
Air-conditioning system was installed at the theatre in the late

1940s.
Judging from photographs taken in the early 1950s, the cafe and waiting room had been converted into shops.
The theatre showed English language films from the mid-1940s until the late 1970s.In the first half of the 1980s, adult films were shown. Before its closure on 1st December, 1988, Japanese language ,English and Chinese dialect films were shown.
A hotel with a cinema with two auditoriums was built on the site of the theatre and the adjacent M2 Cinema.
Suwanti[Raymond Lo]

There is a photo of the Majestic in Flickr:
View link

Thanks Raymond. Majestic did make you wonder what went on in Hong Kong towards western culture in a funny way. When I was a kid, I used to be very embarrassed to walk along Nathan Road with my Dad as Majestic also put up some massive boards with explicit drawing for their movies. Unlike the Isis/Liberty rivals, movies at Majestic usually had some very funny/dodgy titles. However, Majestic also showed some non-mainstream movies which are too extreme for other cinemas. Clockwork Orange was a classic. I thought it was an adult movie when I was a kid simply because it was shown in Majestic only. Empire of the Sun was also shown there I think but the last film could be The Last Emperor. I could be wrong.

The facade of the Majestic Theatre had changed three or four times.

a photo of Majestic before it underwent renovation.
View link
Had never seen that stretch of Nathan Road had so many trees.