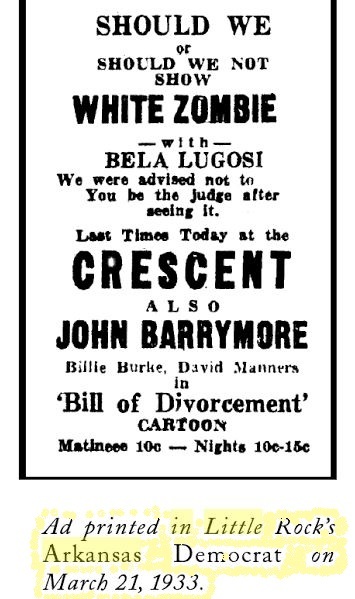 The Crescent was mentioned in this October 1920 article in the Fayetteville Democrat:

LITTLE ROCK, Oct. 21â€"J. M. Ensor, manager of the Crescent Theater of Little Rock, has issued a call for a state meeting to be held next Monday at the Marion Hotel for the purpose of organizing a moving picture exhibitorsâ€™ association in the state of Arkansas.

That was the only mention of the Crescent on that site.

Boxoffice published the obituary of J.M. Ensor in its issue of July 3, 1937. It credits him with being one of the organizers of the Tri-State Association of Motion Picture Theatre Owners of America and an early member of the Independent Theatre Owners Association of Arkansas. He died on June 25, at the age of 67. He had operated the Crescent Theatre for 22 years.

The January 28, 1956, issue of Boxoffice reported that the Crescent Theatre had been closed and would be demolished to make way for a bank’s parking lot. The Crescent had been in operation for forty years.

Too bad no photos yet!