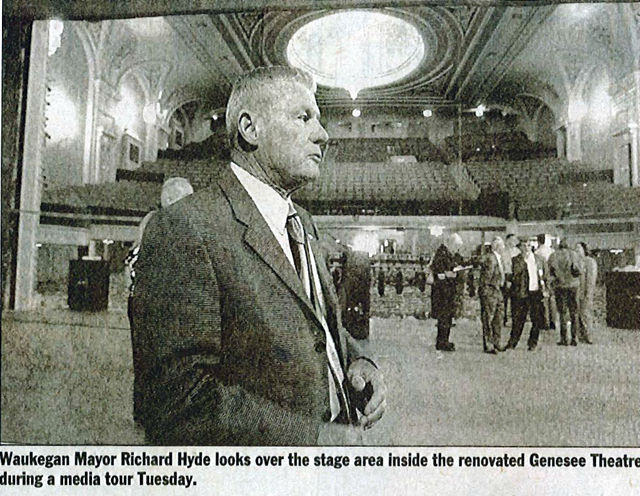 The Genesee Theatre was opened on December 25, 1927 and designed by Edward Steinberg, with the building originally housing the theater, 11 retail spaces and 44 apartments. It closed as a movie theatre in 1989.

Work began on the restoration project in 2001, and the theater was reopened for live perfomances and concerts in early-December 2004.

Just to remind anyone who is interested. The Genesee’s marquee is pretty much identical to that of the Coronado in Rockford Illinois. Shape & style, minus the various colored insets.

The silver screen will be back in use at the Genesee Theatre in north suburban Waukegan starting next month. Officials are lining up a schedule of classic films to be shown with the $40,000 of projection equipment that was installed earlier this summer.

The first feature is being held close to the vest, with Mayor Robert Sabonjian telling City Council on Monday only that it will be “a true American classic.”

Genesee Executive Director Gary Zabinski said Tuesday that an exact weekend date in August, as well as the movie in question, will be announced later this week. He added that “a lineup of classic films as well as more recent ones” will be put on the schedule.

But Zabinski made it a point to say that “we’re not going to be a movie house” in the strict sense of the term.

“The Genesee is not going to revert to being a movie house where you have movies being shown there six or seven times a week,” Zabinski said. “It deserves to be more than that, and it’s proven it can be more than that. [but] I think there’s room for this.”

In announcing the installation of the equipment at Monday’s City Council meeting, Sabonjian said he hoped that the regular scheduling of movies would be part of “adopting a more businesslike attitude” at the Genesee.

Sabonjian noted that the theater requires an annual $1 million payment from the city to retire the $24 million in renovation bonds, and another $350,000 in the form of a “support payment” toward operations from the Friends of the Historic Genesee Theatre.

Zabinski said details of film offerings are still being worked out, but the general plan is to offer screenings “initially one night a week for a while” around the theater’s live performance schedule, which typically eats up weekend dates.

The purchase of projection equipment was put together by the nonprofit Friends organization, which conducts fund-raising efforts for the theater. Zabinski said the equipment — a 35 mm film projector, and a digital model with both high-definition DVD and Blu-ray capability — is a mix of new and refurbished equipment, including parts culled from vintage Genesee projectors.

Also on the entertainment front, Sabonjian said Monday that his decision to pull funding for the Waukegan Municipal Band’s lakefront concert series was made “in order to demonstrate good faith” with employees whose jobs are on the line during budget talks.

According to Sabonjian, the annual $60,000 stipend for band members would cover the salary of one full-time police officer or firefighter.

“It is not a decision I took lightly,” said Sabonjian, encouraging the Municipal Band to launch “a vigorous fund-raising effort or seek a corporate sponsorship” to float a concert series in 2010.

Band officials announced last week that they would perform the final three Tuesday night concerts on a volunteer basis. The season concludes at 7 p.m. July 28 at the lakefront’s Stiner Pavilion with a presentation of “Audience Favorites.” – from the Chicago Sun-Times

Nice Chuck1231. We’re those some type of promotional pics at one time?
They seem a bit enhanced with photoshop or something.
The street surface is perfect in one. Plus the moon, shadows and interior details in the night shot look almost fabricated.

While it was incredible that a renovation of this old movie palace ever was accomplished, it is a shame that the renovation team felt the need to alter and change the exterior marquee and entrance, going with a “modernization” look. If one is going to preserve and restore, then keep the original marquee and front of the theatre.

With its massive crystal chandeliers, lushly painted decorative plaster and state-of-the-art sound system, the Genesee was restored—at a cost of $23 million—to attract visitors to downtown.

“This will make people believe Waukegan is on its way back,” Mayor Richard Hyde said Tuesday.

And Cosby as an opening act “is like coming out of the starting blocks,” Hyde said.

City officials are banking on the 2,500-seat Genesee drawing people—and their entertainment dollars—to Waukegan and its lakefront, which the city wants to transform with shops, restaurants and homes. So far, a parking deck and some housing are under construction downtown.

“Things are happening all over the place, and it is an exciting time for Waukegan,” said city spokesman David Motley. “We’re looking at it as a catalyst for change in downtown.”

“It is a first-class facility,” said David Rovine, general manager of the Genesee for SMG, the Philadelphia arena, theater and convention center manager recently hired to run the Genesee. “There are no limitations because it is so grand.”

Rovine declined to name other acts to follow Cosby or to say how many he expects to book a year.

He said the Genesee will bring something for everyone, from Broadway-style shows to concerts to comedians.

“We will really match the makeup and temperament of the people here,” he said.

In many ways the Genesee, opened in 1927 and closed in 1982, harks back to downtown Waukegan’s heyday when it was a bustling host to several grand theaters and their many patrons.

“There were lines down to Sheridan Road,” said Hyde, remembering the Genesee of the 1930s. “And it cost 15 cents to get in.”

But the restoration of the theater has not been without controversy. The project’s cost originally was pegged at $15 million, and it’s also opening a year later than planned.

And some residents still bring up the messy departure of Ray Shepardson, a national theater restoration expert who oversaw the project. Shepardson left earlier this year after quarreling with Friends of the Historic Genesee Theatre, a non-profit group formed to help raise funds for its operation.

Among other things, Shepardson and the non-profit disagreed on his programming strategy, which called for 200 to 300 shows a year. Some city officials and members of the Friends board called that plan unrealistic.

Illinois Sen. Terry Link (D-Vernon Hills), a member of the board, acknowledged the acrimony.

“We’ve had a lot of bumps in the road, and we have had a lot of peaks and valleys,” Link said. “But the only thing that matters is the peak of Dec. 3.”

Calling the Genesee one of the finest theaters in the country, Shepardson said he was heartbroken over what happened.

“I just think it’s very unfortunate that my approach to programming and operation of the theater has been abandoned,” he said. “Mark my words. Start counting the shows and you won’t need all of your fingers and all of your toes.”

But those thoughts were far from the minds of many who waited outside the Genesee on Tuesday afternoon for the announcement of the opening act. Tickets for Cosby will go on sale at 10 a.m. Oct. 22 through Ticketmaster. Prices haven’t been announced yet.

“Contrary to what Chicago thinks,” said Mike Pasiewicz, a local native with memories of the Genesee before it closed, “there is a Waukegan, and we are moving on up.”

Anything current on this theatre?

I just heard from a friend that the Genesee management is looking for an organist to play before shows. Does anyone know if they restored the barton and it must be in working order? I see where they resumed the movie series and you can buy tickets for events in person at the box office as well as the Chicago Theater in Chicago which means MSG is the new managment I imagine.

If you scroll right from this Facebook photo, there are 500+ various renovation photos on the Waukegan Revsisted page. Pipe organ etc. All credit Dan Paul.