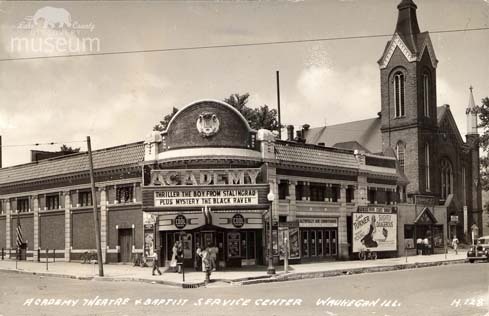 The Academy Theatre was opened in 1916. It was situated across the street from the Genesee Theatre, which reopened in December 2004 after a massive restoration project.

The Academy Theatre was last known as the Fiesta Palace, a concert/banquet hall which closed in 2003. Unfortunately, this almost century-old theater was destroyed by a blaze in October of 2004.

Here is an older postcard view and [url=http://cdm.digitalpast.org/cdm4/item_viewer.php?CISOROOT=/lakecoun004&CISOPTR=2312&REC=1]Here{/url] is another

according to our records, this theatre was part of the balaban and katz chain as of October 1st, 1049. for a complete list of b and K theatres visit www.balabanandkatzfoundation.com

Here is part of a Chicago Tribune article from November 2004:

Having declared the fire-ravaged Fiesta Palace structurally unsound, Waukegan is demolishing the former theater, with plans to save a few historical artifacts, officials said. Preservationists had asked city officials to consider salvaging the building’s red brick facade, but the city moved quickly to clear the site after the fire Oct. 27.

The building at 202 N. Genesee St., across from the newly renovated Genesee Theatre, opened in 1916 as Academy Theatre. It was converted into Fiesta Palace, a dance hall, and had been closed for two years, officials said. The city bought the building for $850,000 last year with hopes of renovating it.

Margaret Martin, a board member of the Waukegan Historical Society, said she was disappointed the city didn’t work harder to save the building. “I understand the safety concerns created by a fire-damaged building, but I’m dismayed at the rush to demolish such an important part of Waukegan’s past and future,” Martin said.

Since when have hotels become more popular than and started to take the place of cinemas? (LOL)

I was a the Genesee Theatre a few years ago. I think the former site of the Academy Theatre ended up just becoming a multi level parking garage.
I don’t remember a steak house or anything else. Unless it was kitty corner from the Genesee, and not directly across the street from it.
I seem to remember taking pictures of the Genesee marquee from the 3rd level of that parking garage. This was maybe 2006 or so.
My full Genesee experience that night is on the Genesee CT page.

This place was definately where the new multi level parking structure is that served the Genesse when I was there.

I can hear the preview voiceover playing my head now.

The Academy Theatre is mentioned in the July 1, 1916, issue of The Moving Picture World:

“Waukegan, Ill.—A reproduction of the old Waukegan Academy, which stood for fifty years on the site of the new photoplay house, is a feature of the lobby in George K. Spoor’s (head of the Essanay) new Academy theater here. The other side of the lobby has a beautiful painting of the local harbor with its picturesque lighthouse.”