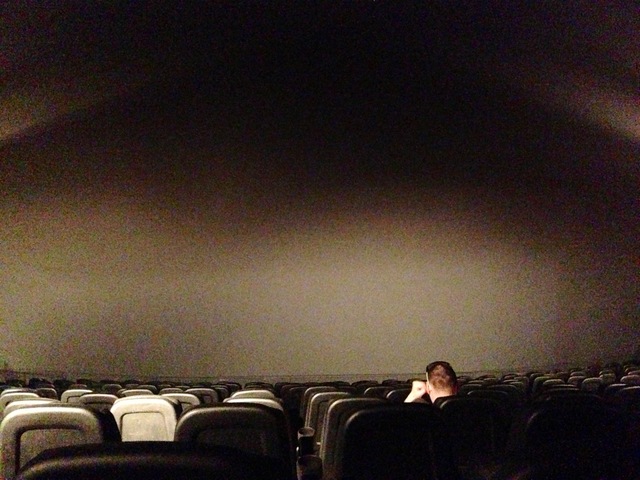 The Paramount Montreal is located inside the historic former Simpsons building at the corner of Ste. Catherine West and Metcalfe Street. Occupying a full six floors, its ultramodern design incorporates the architecture of this turn-of-the-century structure. In contrast to the existing facade, the design creates a sense of lightness and transparency.

The exterior signage is inspired by Art Deco. Programmed special lighting and fibre optics create various visual effects including the movement of film. The urban Art Deco theme is continued in the interior design’s variety of colours and textures. Large fibreglass panels suspended in open spaces serve as projection screens and add to the interiorï¿½s sense of transparency. The design is versatile, so that theming can be changed quickly and easily to accommodate different tastes or to respond to various clienteles and special events.

Paramount Montreal also is among the continent’s most successful and popular theaters. In April 2007, it was renamed Cinema Banque Scotia.

An row of D-Box motion seats was installed in time for the new Harry Potter movie in Cinema 6 and Cinema 7 has been converted into an UltraAvx cinema with an slightly larger screen and larger and more comfortable seats.
UltraAvx has the same rates as the IMAX screen.

Old Simpson’s floors:
B Shopping mall and food court with indoor connections for Le Cours Mt. Royal (which had the old Egypiten cinema) for the Peel Metro and Place Montreal Trust for the McGill Metro.

Is the IMAX screen the largest in Quebec?
Ground: Simons, Ticketing lobby for the cinema
2: Simons
3-5: Cinemas 1-6, the amusement arcade and most refreshment areas
4: IMAX lobby (cinema 13)
6-8 Cinemas 7-12, party rooms and bar.

I uploaded the newspaper grand opening ad as well as the flyer that was handed out. When it opened, Famous Players took over all the ads in the Peel metro station as well as many other metro stations.

Should be listed as Cineplex.

As told above that it listed as Cineplex, it should be given a proper name: “Cinéma Banque Scotia Montréal” and was formerly operated by Famous Players as Mike said from June 1999 until the merger in 2005 as Paramount Montreal (until the renaming in 2007).

Any idea what happened rivest266? I thought the building was renovated extensively from 97-99 when they were converting the former Simpson’s Store into the Paramount Multiplex.

More repair work photo uploaded. Also, the owner of the Simons is making noises for renovations. The building owner, an insurance company inspected the facade and decided to make repairs.

The outside repairs are completed. Another photo section of the building in the photo section. When the weather improves, the banners etc. will be back up.

This theatre opened with The General’s Daughter (and its French-version, La Fille du Général), Tarzan, and Besieged. Its IMAX movies include Encounter in the Third Dimension (and its French version, Rencontre Dans La Troisième Dimension) and Everest.