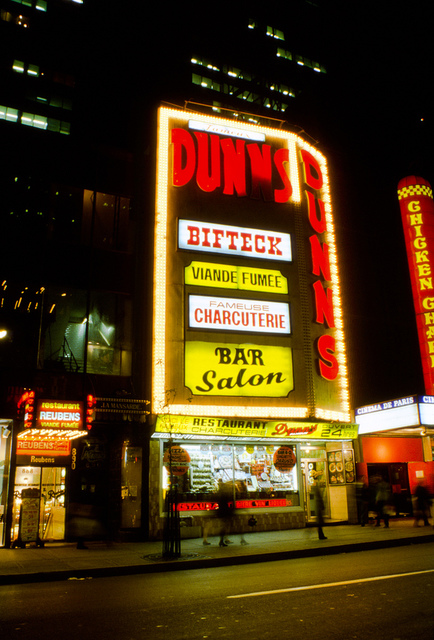 The Cinema de Paris opened in 1968 and closed in 1997 when the landlord refused to heat the theater.

The policy was French language films into the mid-1970’s, then English repertory programming until closing in 1997.

In 1981, “Calgulia” was shown at the theater with many people coming in from Toronto where it was banned by the Ontario censor board.

This cinema was opened by Michel Custom, sold to Odeon, and later to Famous Players and then, sold again.

The Cinema split into three screens in 1989.

Here is a photo of the CinÃ©ma de Paris, between Dunn’s and Chicken Charlie. I took this around 1989. I believe the only movie I ever saw here was the magnificent “MoliÃ¨re” by Ariane Mnouchkine, made in 1978. Can someone confirm that it played there?

This Cinema de Paris seems to be in a different location on Rue Sainte Catherine from the one I just posted above. Can anyone clarify?
This old postcard also shows several other Rue Saint Catherine movie theatres that include the Cinema de Paris, Palace, Capitol, Strand, Loew’s.
posted by Gerald A. DeLuca on Apr 12, 2005 at 10:17am

Although I haven’t lived in Montreal in quite some time, I seem to recall that the Capitol theatre was located to the left of Dunn’s restaurant, a couple of doors down. The photo doesn’t show it and either it was already demolished or is out of view. It does clearly show the Cinema de Paris to the right of Dunn’s, so I can only assume that the Cinema de Paris relocated from the location shown in the post card view of the Ste Catherine street scene or it’s a case of artistic licence in the post card rendering.

in Montreal there were 2 different “CinÃ©ma de Paris”

this postcard refers to the old Cinema de Paris (which was owned by France-Film) at 694 St. Catherine W (now club supersexe)
from my website at www.movie-theatre.org

Mike,
I can do it if you don’t care to. Thaks for the clarification.

Can anybody help me?

I saw Forest Gump at a cinema somewhere along Ste Catherines in ‘94.
I’m pretty sure it was around there, anyhow, because we went to Nickels for dinner that night.

I was 14 at the time, and all I recall is going up a narrowish stairwell to a small box office, where the cinemas were. Does anyone know which theatre this might’ve been?

That was the Loews.

It may had played second run at the Cinema Du Paris after its run at the Loews.