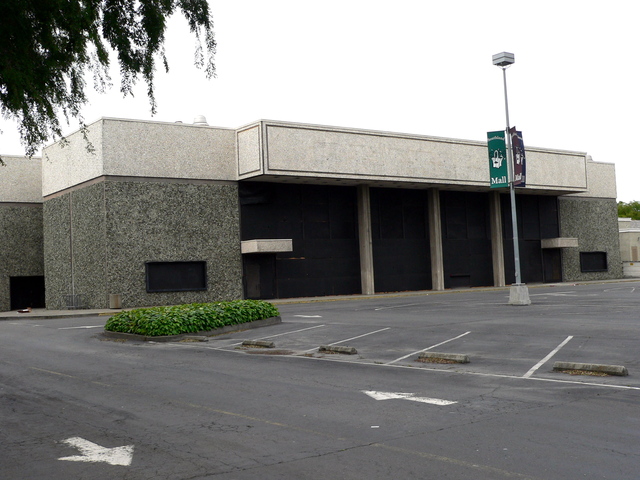 Located in the Southland Shopping Center. This theater, which opened on January 1, 1968, was the first multi-screen theater built in Hayward. It started as the Cinema 1 & 2, showing first-run fare. Seating was provided for 1,276 in screen 1 and 836 in screen 2. Eventually, more screens were added and the original 2 auditoriums were chopped up.

At the time of its closing in 2000, it had been a 5-screen theater. A 25-screen theater with stadium seating in nearby Union City, declining attendance, and General Cinema’s decision to pull out of the San Francisco Bay Area market, led to its closure. General Cinema had ran the theater during its entire operation. The theater was boarded up and sat vacant since its closure, and was demolished in early-2006.

General Cinema is no longer either following its acquisition by AMC.

Sadly now an elphant bar now sits were it was.

General Cinema opened the Southland Cinema I & II on December 21, 1967, according to an item in Boxoffice Magazine’s issue of January 1, 1968.

Does anyone have any photos of the theatre to post?

I remember seeing The Godfather there when it was called the Cinema 1 & 2. It was nice inside and the cinemas were a good size. The screen looked like a huge bordered pictureframe. During the intermission the screen and border turned a pleasant light blue. I never went to it when more cinemas were added, I was curious if they took the original two and split those.

balconyclosed, yes, they took the two cinemas and split them into five. The screen set up you are talking about was called shadowbox and many General Cinemas had this shadowbox design.

I hated these theatres and that awful “shadowbox” screen concept (no curtain, no masking). General Cinema started the then new to California single feature policy and drove a lot of older downtown theatres out of business or into porn before their final demise, the Ritz and Hayward in this case. These theatres were poorly maintained and managed from the beginning and really went downhill when they sub-divided them into little shoe boxes. The last time I attended the film was so dim it looked like it was being projected with a 100 watt light bulb. I asked for my money back and never returned.

Century came in and drove this theatre as well as the Festival and UA complexes on Hesperian Blvd. out of business with their new and much larger San Leandro and Newark multiplexes. That left Hayward with no movie theatres at all until Century opened their multiplex downtown, just a few blocks from where the Hayward and Ritz once stood.

Except for that ghost photo and one of the ad i place the other photos JIM SHEEHAN was the second manager of the theater while LARRY GLESON WAS DIVISION MANGER, both of them I work with at WESTGATE CINEMA in BROCKTON MA. we are all still friends today at one time while I was managing BROCKTON I vacationed out in Ca. visiting with both the theater at the time was a very high grossing theater, and remained that for many years, I well find out the seating next time I speak to JIM, I now am retired after forty wonderful years in theaters, and live in ABQ. N.M. DENNIS MAHANEY

The second manager of SOUTHLAND was JIM SHEEHAN just spoke to him and asked what the seating count was for the original twin before the spit into five theaters 1276 and 836, alway run by GENERAL CINEMA the theater is now gone.

I just read on FB GENERAL CINEMA MEMORIES, CINEMA ONE SEATING 1276 AND CINEMA TWO WAS 836, THIS FROM MY OLD FRIEND AND ONCE MANAGER OF THIS UNTIE JIM SHEEHAM

I saw Willy Wonka there, when I was six. My grandmother took me. She bought me popcorn in the mall and thought it would be a good idea to have me carry it as we walked across the parking lot. Needless to say, it was not a good idea. I wound up with less than half of it by the time we got inside. I guess they didn’t care so much about that, back then. Parts of the movie scared the bejesus out of me. I didn’t live anywhere near there, so I only went to a couple of other films, the whole time, but I’ve never forgotten the first time.