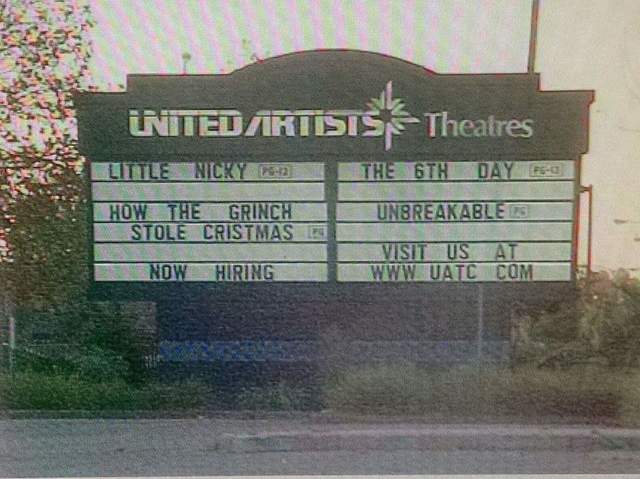 The Hayward 6 Cinemas was opened by Robert L. Lippert Theatres Inc. (Affiliate Theaters) on November 13, 1976. It was located near Hayward’s Southland Mall. For a while it was operating with 5-screens.

By 1983 it was operated by United Artists. Competition from nearby multiplexes with stadium seating helped bring its demise in August 2002. It became a church named Heart of the Bay Christian Center.

Went and saw a movie there late evening once and never went there again. Halfway during the movie it went off focus and after 5 minutes, I went to the lobby and no one was around. The snack bar was closed, the door to the projection booth was open, so i went in there and went upstairs and the projectionist was asleep. I woke the guy up and he fixed the picture back. Then later, this couple sat in the last row and got on their cell phones and started talking to people. I got up and walked up to them and told them to take it out to the lobby, turned out they were employees working there! I immediately asked for the manager, I really went off on him. I demanded a refund and got it. I wrote a letter of complaint to United Artists, and they never responded to me. No wonder that theater closed.

Another reason I am so glad I got of the Theatre business in 1983 after almost ten years.Guys like me are gone; that is guys like balconyclosed CAN’T ENJOY A DECENT FILM!!!!!!

That is why Gals like Balconyclosed…Just in case it ain’t a guy.Okay.

I remember seeing Independence Day in that old theater back in 96 during it’s theatrical run. Starship Troopers in 1997 with my dad and my cousins. It’s funny how my dad took us to see this flick due to the violence and some sexuality which is tame today. The Relic in 96 also and Deep Impact in 1998. Awesome time in at this movie theater as a kid. I think I might of saw SideKicks with Chuck Norris and the late Jonathan Bandis back in 93 in this same theater.

I saw The Wiz here in November ‘78! It was 5 screens then. 3 shoebox on one side and 1 shoebox and a larger theatre on the other side. Later the restrooms became 2 cinemas and #1 and #2 became 1 for a total of 6 screens. Actually a nice theater comparison to UA Berkeley (yuck!).

the building is currently being used as an Armed Forces recruiting center.

Grand opening ad for November 12, 1976, as Hayward 6 Cinemas is now in the photo section.

Ron - thanks for posting this ad. I was always pretty sure that this opened with six screens and always figured the five screen confusion came from the GCC Southland up the street.

However, I think it opened as a UA. Festival operated the Festival 6 (later 9), also up the street.

It was opened by Robert L. Lippert Theatres. According to a news clipping in the photo section, Robert L. Lippert, owner of Hayward 6 Cinemas, passed away four days after the theaters opened.

Looking through various ads available through Newspapers.com it does appear that though this opened as a six screen theatre in 1976, sometime around November 1977 it began appearing as Hayward Cinema 5. Wasn’t until around spring 1988 that it returns to six screens.

Looking at the footprint of the building it doesn’t seem likely they added/removed part of the structure so my guess is that they needed an auditorium with larger capacity and knocked down a wall to make five screens, and likely put it back up later when having more screens outweighed having more seats.

Also, this began appearing in the International Motion Picture Almanac as a UA theater in 1983.