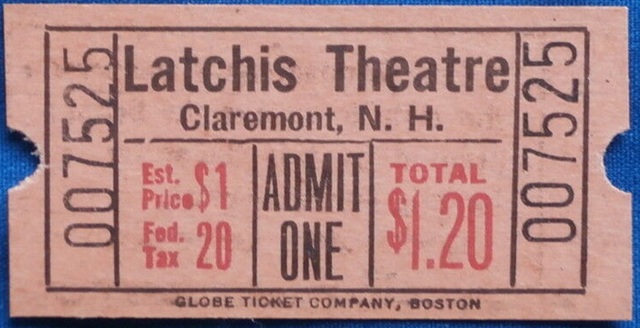 A classic old-style theatre built by the Latchis chain, which also owned other theatres in Vermont and New Hampshire. Built sometime in the late-1920’s, this theatre operated at least until 1982. It was reopened in 1985 but soon closed again.

Now closed, but the front part of the building looks in good condition as of 2009 photos - entrance is not boarded up. However, the façade is all that remains, the auditorium has been demolished and the site is a parking lot.

In the 1942-43 edition of the Motion Picture Almanac, the Latchis in Claremont is, not surprisingly!, listed as part of the Peter D. Latchis theater circuit of Brattleboro VT. Latchis ran 14 theaters at that time, in NH, VT and MA.

Visited this theater, shortly before the “house” was demolished for a parking lot, as a reporter for a small weekly. Those touting demolition made their case. The interior was damp and had fungi and suffered water damage. The former owner dropped by during the press conference. He was none too popular with the citizenry present… As the Claremont Opera house is still hosting live acts at the city center, this theater was considered surplus in an industrial city that has seen better days. A parking lot replaced the “house.”

The Theatre Historical Society archive has the MGM Theatre Report for the Latchis, it’s Card # 475. Address is Pleasant St. There is an exterior photo dated March 1941. Condition is Good. The report says that the theater opened about 1925 and was showing MGM films. There were 790 orchestra seats and 360 in the balcony, total 1,150 seats. Competing theater is hard to read but looks like “Magnet”; however, instead of making out a Report card for the Magnet, the MGM agent made one out for the Tremont Theatre. The 1940 population was 12,100.

TaxiManSteve, What year was the auditorium demolished, and were there ever any photos of the interior published in the paper?

The Latchis was open until 1982 or so, when competition from the Claremont Triple Cinemas on Washington Street (as well as home video and cable movie channels) drew a lot of people away from the Latchis' older and more “lightly maintained” single screen. The theater sat dormant (with a MOTEL HELL poster still up in one of the outdoor cases) for a few years, until the owners of the nearby New Falls Cinema in Bellows Falls, VT opened it up again in 1985, with a mix of second-run titles and new features, along with a vintage CAPTAIN AMERICA serial chapter before the film. The continued disrepair and older titles didn’t do much to revitalize the theater, and it closed again within a few months, to lie dormant until its eventual partial demolition.

There was a newspaper article in the EAGLE TIMES (Claremont, NH newspaper) in the late 80s/early 90s about the state of the interior of the theater at that time, with photos of the torn and paint-splattered screen, and overall state of decay and vandalism. As Steve said above, the town didn’t see the value (or have the means or funds) to restore or save the theater, so the auditorium was turned into a a parking lot. A few businesses have occupied what’s left, with the marquee, entry ramp with stone floors, poster cases, stairs to the balcony and balcony lobby still intact, perhaps the most fitting of which was Captain R&R Video for a short period in the late 90s/early 00s.