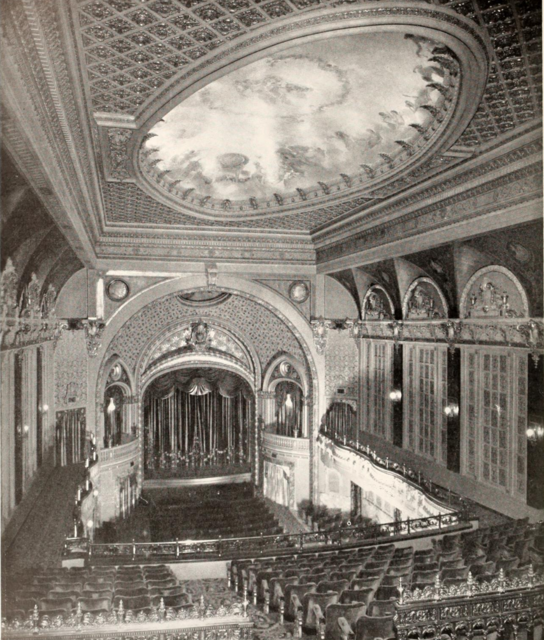 This was the first of around 288 theatres designed by architect Simeon Charles Lee, who was only 28 years old at the time. The Tower Theatre was the first movie theatre to be built in Los Angeles as a ‘talkie’ theatre and opened on October 12, 1927 with George K. Arthur and Lois Wilson in “The Gingham Girl” (a silent movie with 2-strip Technicolor) and Vitaphone shorts featuring “Waring’s Pennsylvanians” & “Van & Schenck”. The theatre was equipped with a Wurlitzer 2 manual 10 rank theatre organ opened by organist ‘Boisclair’. Interior decorations were by Edwards Spout.

Built by H.L. Gumbier on a plot of land measuring only 150 feet long and 50 feet wide, it had previously been the site of the 1911 built, 900-seat Hyman Theatre, later renamed Garrick Theatre, a single story building, which was demolished. There was a row of small shop units which ran along the base of the building on 8th Street, and above them is a highly decorated exterior side-wall which is punctuated with false windows and Classical style surrounds. On each of the window ledges is an Indian head-dress sculpture, and atop each window, two nude figures recline, a discreetly draped masculine director with a camera & megaphone, and a scantily clad starlet with beads and a mirror. Soaring above the corner of the building is a decorative high tower which has a four-sided clock, while on the main South Broadway facade above the marquee is a huge stained glass arched window depicting a fleur-de-lis pattern, across which is draped a coil of film strip, complete with the purple stripe found on early sound film stock.

The interior of the theatre is in a French Renaissance style and the tiny lobby is loosely based on the Paris Opera House. Inside the auditorium, side slips from the balcony serve as exits running down the sidewalls. The proscenium opening is narrow, because of the site limitations and has a coffered anti-proscenium which contains two boxes. A large dome in the ceiling has a coffered surround and there are many fine decorative details on the walls.

Just after opening in October 1927, the Tower Theatre held the West Coast Premiere of Warner Bros. “The Jazz Singer”, due to the fact that their Warner’s Hollywood Theatre was not ready to open. It was the first theatre in the city to have refrigerated air conditioning, and patrons were invited to look through a window on the balcony stairs to watch the ‘mechanics’ of this working. Under the theatre was a spacious waiting room, which also doubled as a ballroom. The Wurlitzer organ was removed from the Tower Theatre to the Los Angeles Theatre when that opened in January 1931.

The Tower Theatre had several operators over the years, including Fox West Coast Theatres who ran it in the 1930’s as the Newsreel Theatre. In the late-1930’s Sol Lesser’s Principal Theaters Corp. of America operated it as a general run theatre and was renamed Music Hall Downtown on August 8, 1945 playing Burgess Meredith in “Story of G.I. Joe”. In 1965, it was acquired by H.L. Gumbier’s daughter, and it was renamed Tower Theatre, reopening on 25th October 1965 having undergone a complete renovation, and operated under lease to Metropolitan Theatres. The actual ‘tower’ on the corner of the building suffered extensive damage in the 1971 earthquake and was shortened considerably for seismic safety reasons.

One of the wonderful movie theatres still intact in downtown Los Angeles, the Tower Theatre has been closed for movies since April 1987. It has since been converted for use as a nightclub, when a level wooden floor was placed in the orchestra seating area, but the nightclub never opened. The theatre became a swap-meet market area for a while. For most of the 1990’s it lay empty and unused, apart from location film shoots where it can be viewed in the movies: “The Omega Man”, “Last Action Hero”, “The 6th Day”, “Fight Club”, “Coyote Ugly”, “Twilight of the Golds”, “End of Days” and “The Mambo Kings”. In 2000 it was taken over by the Brazilian based United Church of the Kingdom of God(UCKG) serving English speaking congregations (they operate Spanish language services in the former State Theatre opposite). It also hosted special events and continued as a film location venue. Currently this theatre is one of the four theatres owned by the Broadway Theatre Group, which was founded in 2007 to manage, restore, and preserve the historic theatres of Broadway. In late-2008, it reopened as a rock concert venue, but this was later closed. It was announced in October 2012, that it would reopen in 2014 as a concert venue and bar. As of early 2016, the Broadway Theatre Group manage the Tower Theatre, the Los Angeles Theatre, the Palace Theatre and the State Theatre. They have done significant restoration as well as new lighting and electrical systems on all four theatres. The restoration is ongoing. The Tower Theatre, Palace Theatre and Los Angeles Theatre are currently rented out for performing arts, live music, film shoots and private events, (and occasional movies at the Palace Theatre and Los Angeles Theatre) which the State Theatre is leased to the Cathedral of Faith Church.

In 2019 work began to convert the Tower Theatre into an Apple store, which restored and renovated the original features of the building. The architectural firm Foster + Partners and Gruen Associates took great care to bring the theatre back to its original splendour. The Apple store opened on June 24, 2021. It is envisaged that special events will also take place in the building.

The Tower Theatre is designated a Historic-Cultural Landmark. It is also on the National Register of Historic Places.

The facebook page I mentioned above is gone, but the Broadway Theatre Group has an official age for the theatre at www.towertheatrela.org

Join the Theatre Historical Society of America as they visit this lovely theatre the morning of June 28th 2017. 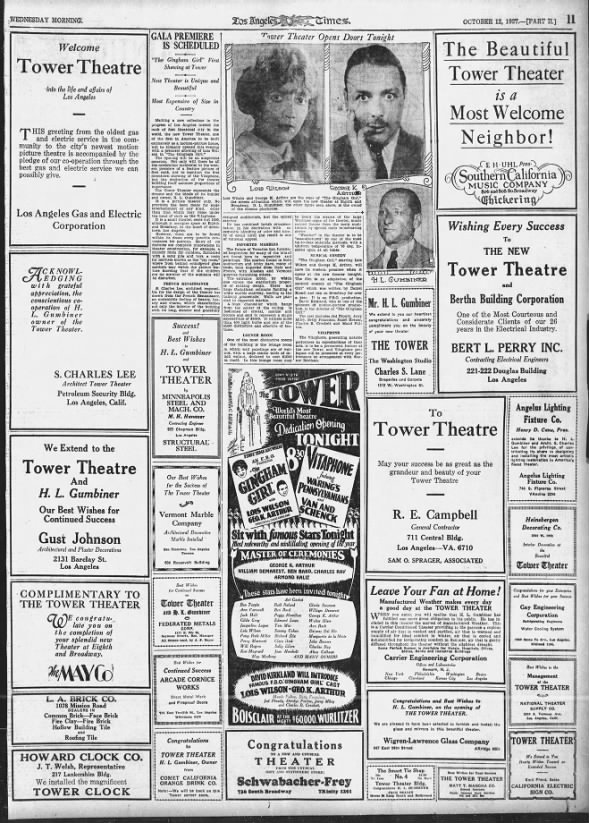 The Tower theatre is currently being leased by Apple who are restoring the theatres architecture and seismically retrofitting it to become the downtown Apple store. They are restoring all of the original interior and exterior architecture and decor but using the theatre main floor as the helloing floor but still available as a performance space (they say). it’s better than just seeing this great building sitting there crumbling. I hear the new marquee will be done in the style of the original, but lightbulb “Tower” blade sign will stay. Should open in 2020 I would think. Each corner of Broadway and 8th are being restored.

There is a YouTube tour of the place. Don’t have the tech savvy to provide a link.

Several videos about the Tower Apple store have been uploaded to YouTube. Here is one of them. I don’t know if it’s the same one Rob found.

Article with photos of the Apple store conversion.