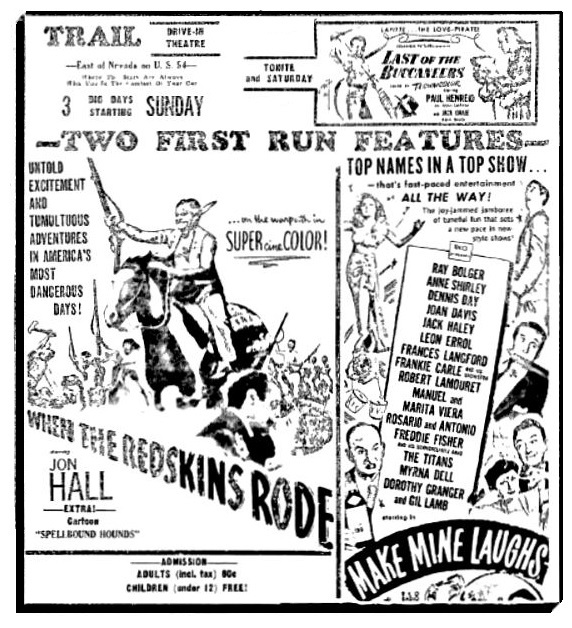 The Trail Drive-In opened on April 19, 1951, featuring the 1950 adventure movie “The Last of the Buccaneers” with Paul Henreid, Jack Oakie and Karin Booth. In addition to the feature film, cartoons were also shown. It was owned by Harry Rowland, Luther Osborne and Keith Zigler from Hutchinson, KS. The drive-in was managed by Comp Jarrett. The parking ramp could hold 350 cars with in-a-car speakers. Additionally there was a playground for the kids and families to enjoy.

On March 16, 1960, Harley Fryer bought the Trail Drive-In and the Fox Theatre in Nevada, MO. At that time Fryer also owned the Barco Drive-In in Lamar, MO. Richard Fryer (Harley’s brother) was named new manager of the drive-in. The screen tower was rebuilt and other improvements were made in April of 1966 for the beginning of the summer season. Then in March of 1968, it was sold to Richard Fryer.

In September 1987, the Trail Drive-In was closed for good. Novak commented when it closed, daylight savings time hurt business, plus drive-in’s are just not that popular anymore.

This note from the June 24, 1950 issue of BoxOffice makes me wonder whether the Trail first opened in the summer of 1950 as the Nevada. Same owners, same location.

“NEVADA, MO. – The new 350-car Nevada Drive-In being erected at a site on Route 54 about two miles east of here by Osborne & Ziegler is expected to be completed and ready for opening about July 15. RCA projection and sound equipment is being installed in the new open-air theatre.”