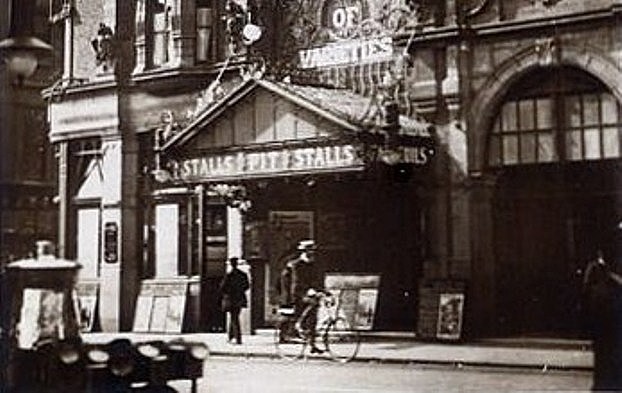 Located in the west London inner-city district of Hammersmith. Originally built in 1880 as Hammersmith Town Hall (architect unknown), live performances began in 1883. In 1885, through to 1898, it was known as the Temple of Varieties. The building was reconstructed to the plans of architect W.M. Brutton and it re-opened as the Hammersmith Palace of Varieties later in 1898. It was soon after this, that Bioscope shows began to be presented in the theatre.

In 1909, further alterations were carried out by noted theatre architect Frank Matcham, and it re-opened on 24th January 1910 with films added to the variety programme. Charles Gulliver took over the management of the Palace in 1913 and he operated it until 1928, when it was taken over by Summers Brown of Greater London Theatres and Cinemas Ltd.

Films played a larger part in the programming during later years, and on Sundays, when live theatre was not allowed, the Palace of Varieties screened films only. From the mid-1930’s it was known as the Palace Cinema, with variety shows presented as an added feature.

The Palace Cinema was closed in around 1947, and was later demolished. Today, the Kings Mall Shopping Centre and the Lyric Theatre (a re-creation of Frank Matcham’s original Lyric Theatre) stand on this block of King Street.