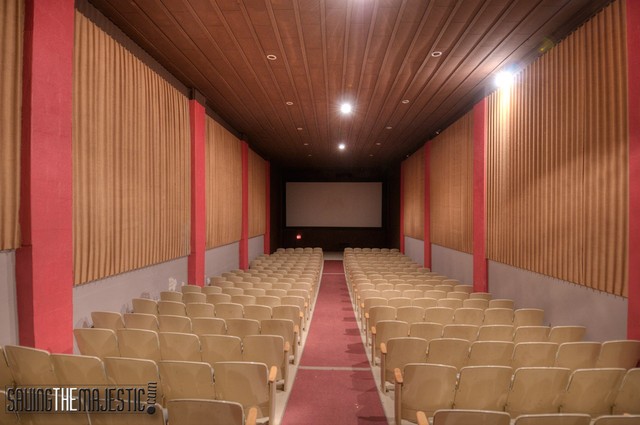 The original 300-seat Majestic Theatre was operating prior to 1941 and was destroyed by a tornado in 1953. A new Majestic Theatre was built and opened on January 9, 1954 with Audie Murphy in “Tumbleweed”. It had seating for 500, all on a single level. Unfortunately whatever distinctive features the original auditorium might have had are either lost or covered with draping when it was split down the centre in the late-1970’s to create a twin cinema.

The original Majestic Theatre at Hebron was destroyed, along with most of Hebron’s other major buildings, when the town was swept by a tornado in the summer of 1953. The opening of the rebuilt house eight months later was noted by Boxoffice Magazine’s issue of January 23, 1954. A small photo of the new Majestic accompanied the article. The theater was owned at that time by Harold Struve.

At the time of its destruction by the tornado, the Majestic had been in operation since at least 1920. An item about then-owner Arthur H. Records which appeared in Boxoffice of July 15, 1944, said that Records had owned the Majestic for 24 years.

Mr. A.H. Records of Hebron, Nebraska, was listed among purchasers of Reproducto Player Pipe Organs in an ad for Jenkins & Sons Music Company of Kansas City, published in the September 18, 1926, issue of The Reel Journal.

Is this closed? no showtimes anywhere online for this theatre. If is still open, where’s the listings for it?

The Majestic Theatre is open showing current movies. Website. The theatre is all digital.

In 1917, Hebron had two movie theaters: the Elite, which had been in operation since at least 1913, and the Gem. I’m not adding them because one or the other might be an aka for the Majestic. Maybe somebody familiar with Hebron’s history knows for sure and will show up here.