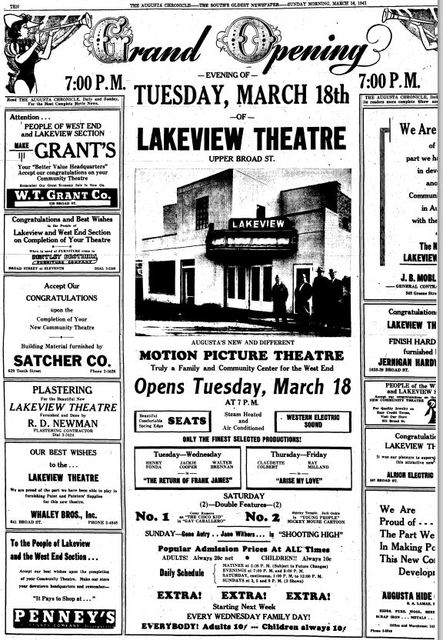 The Lakeview Theatre served Harrisburg, a mill town inside the city limits of Augusta. Opened on March 18, 1941, it was a very plain theatre a few miles from the section of Broad Street where the main body of theatres were located.

It sold itself more on having air-conditioning than the movies which was typical in the south. Even the Imperial Theatre would let moviegoers know of the cool air inside. The box office opened at 1:00 PM, and ran shows until 11:00 PM. The tag line at the Lakeveiw Theatre was, "where happiness costs so little".

The theater still stands on Broad Street heading West. Bowman Lock and Safe had the building for years. Once again TV hurt these smaller movie houses.

The May 3, 1941, issue of Boxoffice said that Altec would be providing “…sound service for Bert Ram’s new Lakeview, Augusta, Ga…..” The house must have opened around that time.

Joe, The building itself is in great shape.You can tell it was an old theatre that served the mill town section of Augusta.

MOVIES PLAYING AT THE LAKEVIEW SUMMER 1953

When a theatre like the Lakeview was built in a basically a Mill Town of Augusta,it never attracted the crowds that went downtown.B-product was played from every ad I have seen.

The Lakeview was also advertised as “Augusta’s only neighborhood theater” and by the early fifties it was on its last legs due to television. My parents discouraged me from going there because of its somewhat sleazy image. The famous birth of a baby sex exploitation film “Mom and Dad” played there and did huge business with shows for women in the daytime and men at night.

Nice write up on this theatre Mike.

I try to do my best NICK STORY.Wish I had his time.

Thanks WHP for the comment on the Lakeview.We know it is still standing.

This opened on March 18th, 1941. Picture and grand opening ad has been posted here.