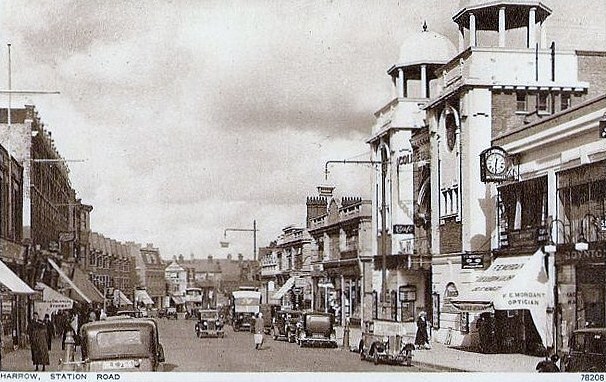 Located in Harrow, Middlesex in what is now north of Greater London. The Electric Cinema was opened in 1920. It was the first cinema in Harrow to have an organ installed, although it was a ‘straight’ church-type organ rather than a theatre organ. It was opened by organist Edgar Jones. The Elecric Cinema was built for and operated by A.L. Tipping, who already operated the nearby Cinema (later Broadway Cinema). The Electric Cinema had a cafe for the convenience of its patrons. In the mid-1920’s it became a live theatre, reopening as the Harrow Coliseum with a stage 31ft wide and 52ft deep. There were twelve dressing rooms and three chorus rooms

By 1928, it had been taken over by Blue Halls Cinemas and it was refurbished. The ‘straight’ organ was removed and a Compton 2Manual/7Ranks organ was installed, which was opened by organist Stanley Lambert. This organ was removed in 1939 to the Ritz Cinema (later Odeon Whitton). It could have been at this time that the Coliseum Cinema was closed. It was still listed in the 1940 edition of Kinematograph Yearbook (edited for publication in 1939), but had gone from listings by 1944. In 1945 it returned back to live theatre use which closed in 1955 and was demolished in 1956.

An Iceland supermarket now stands on the site in 2019.