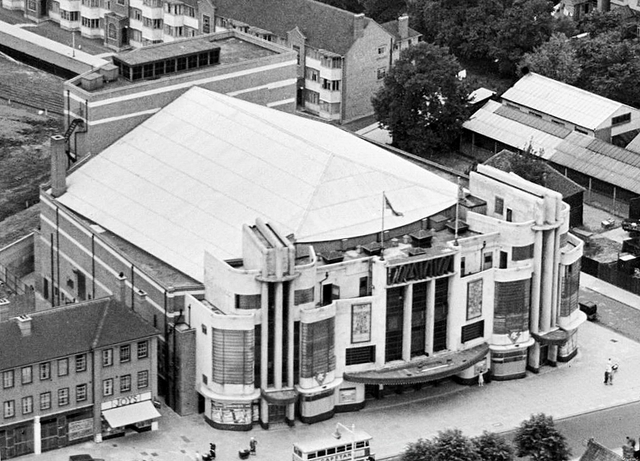 Located on Station Road at the corner of High Mead in Harrow, Middlesex, today a northern part of Greater London. Built for promotors W.C. Dawes & A. Bacal for the independent Hammond Dawes circuit, in conjunction with the Lou Morris circuit (planned as the Ritz Cinema). The Dominion Cinema opened on 9th January 1936 with Seymour Hicks in “Scrooge”. Joseph Muscant and his orchestra appeared on stage and there were 3 variety acts to complete the programme. The original seating capacity was for 2,500 in stalls and circle levels. The magnificent Art Deco style façade consisted of numerous alcoves with columns, windows which curved around corners and the name ‘Dominion’ set above the entrance which was backlit from a recess. Again this was one of architect Frank Ernest Bromige’s masterpieces in Art Deco/Art Moderne styling.

Inside the building, the auditorium was considered ‘rather plain’ compared to the flamboyant exterior. It did have side-walls which were devoid of decoration, but redeemed itself with a stepped ceiling which contain troughs of concealed lighting. It had a 61 feet wide proscenium opening, a stage 29 feet deep and because the building was designed for films and variety stage shows there were 12 dressing rooms. The Dominion Cinema didn’t have an organ to entertain its patrons, but it did have a café.

Only one month after opening, it was taken over by Associated British Cinemas(ABC) and they continued to operate it for many years, continuing for a while with the mixed film and variety policy of programming.

In 1962 it was re-named ABC and it was around this time that the beautiful Art Deco façade was covered over in metal cladding, which remained on the building until March 2021.

In March 1972 the ABC closed with Trevor Howard in "Ryan’s Daughter" which was the last film to be screened in the original auditorium. It was divided into two units, the former stalls area became a bingo club and a 612 seat cinema was made of the former circle which re-opened on 4th June 1972. On 6th August 1981 the former café was converted into a second screen known as ABC 2 with 133 seats.

In the mid-1980’s the ABC chain were taken over by Cannon Cinemas and the building was re-named Cannon. It remained open screening mainstream films until June 1995 when it was taken over by an independent operator and re-named Safari Cinema, screening ‘Bollywood’ Indian films and it continued in that use until it was closed in March 2020 due to the Covid-19 pandemic. A Gala Bingo Club operated in the former stalls area until spring 2016. A church then operated from that space.

In January 2021, the vacant building was being prepared for demolition of the auditorium to build flats. The magnificent façade will be restored.

Some more pictures, inside and out, can be found here:–

I have to say that I have never regarded the exterior of this cinema as “beautiful”. A vast overpowering presence on the street, not, of course, that the cladding was in any way an improvement!

Gala bingo have moved out of the stalls and the V2V church (Victory 2 Victory) have moved in.

Possibility of a restoration, albeit only the facade.

Now closed. As of January 2021 scaffolding had been erected and the blue cladding starting to be removed: https://pastrewind.wordpress.com/2021/01/19/a-peek-at-harrows-hidden-art-deco-masterpiece/

The façade is off! https://harrowonline.org/2021/04/26/first-photos-of-the-art-deco-facade-shows-dramatic-change-to-cinema/