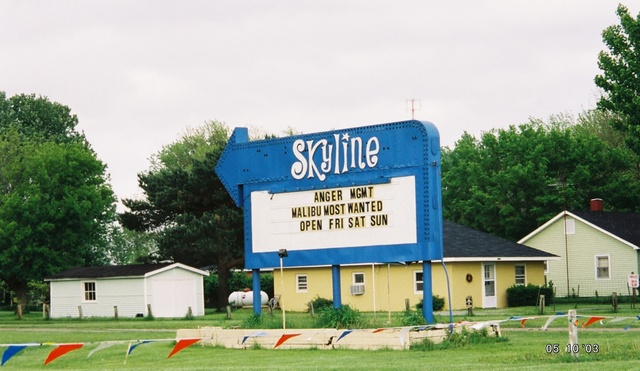 The Shelby Drive-In opened Memorial Weekend 1950 (June 6, 1950) with Gary Cooper in “Good Sam”. It was closed in the 1960’s. In 1971 it was reopened as a new location for the Skyline Drive-In. Runs RCA Brenkert and ORC platter. Running double features Friday nights until end of October then closing for season. Shows a cartoon short before the feature.

Yes, my 1956 motion Picture Almanac has a Shelby and Skyline Drive-ins open in the Fifties.

Here is the story..The Shelby Drive-In and Skyline were open at the same time. When the Shelby closed the Skyline moved to the Shelby location. This is not original location of the Skyline DI.

From Their Website: We have successfully converted to the new required digital projection system…thank you for your support! We welcome your future gifts, and ask for your continued support toward our new monthly obligations. Please attend the Skyline when you can, advertise with us, or donate if you wish.

The Skyline opened on Memorial Day Weekend 1950, built by Robert Wilcox and a partner just after he left the Air Force, and has been in continuous operation since, according to its YouTube video.

Various sources say that Joe (Joey?) Gaudin (Goddin? Gautin?) is the owner, some say co-owner along with Matt Masters. Indianapolis Monthly wrote that Gaudin bought it “from the original owners” in 2009. But I doubt that.

Here’s part of a photo caption about Shelbyville’s indoor Strand from Panoramio, which is closing soon so I’ll paste it here: It opened for movies in March, 1916. William C. Meloy was the owner. Mr. Meloy passed away in 1938. His sons ran it until 1951 when they sold it to the Switow Brothers of Louisville, KY. About 1973, the theatre changed hands again. By this time, the Switows had changed the name to Cinema. This time the DeWitt family became the owners.