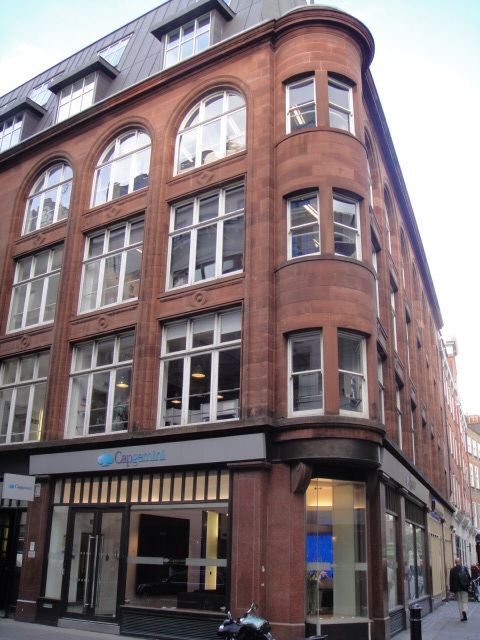 Located on the corner of Wardour Street and Meard Street, in the Soho area of London’s West End. Wardour Street was the heart of film distibution in the UK for several decades and the Bijou Cinema was a preview theatre, located in the basement of a building, its entrance being on the corner.

In the early-1970’s it became the Bijou Cine Club, screening uncensored sex films. From 15th July 1976, it was taken over by Derek Hill, who had been operating the New Cinema Club in various venues in the 1960’s, and it was re-named the Essential Cinema, screening independent and art house films.

In October 1981, it was taken over by new management and began screening gay adult films. Now known as the Roxie Cinema, it went back to independent programming from 1983, and was closed on 25th March 1987 with Sandy Dennis in "Come Back to the Five and Dime, Jimmy Dean, Jimmy Dean" and Kris Kristofferson in "Trouble in Mind".

It was converted into a trendy gift shop, known as the Roxie Cinema Shop, but this had closed by March 1991. By October 2009 it had been converted into offices, used by a consulting company named Capgemini. A design company named Seventy Six occupies the space in 2017.

The Roxie had gone back to independent programming in 1983. Heavy Metal and The Song Remains the Same were playing on Dec. 14th, 1983

It was owned by Frank Green, who also owned the Mercury group of preview theatres in Wardour Street (Baronet, Coronet, Crown, Bijou(in Hammer House basement), and the dubbing theatre on the first floor of his office block (the name escapes me!). I worked as operator at night occasionally in the Roxie in 1983-4 when I was a preview projectionist in the Bijou. I remember watching ‘Pink Floyd:The Wall’, and ‘Koyaanisquatsi’ so many times….! Didn’t know it was ever called the Bijou – as far as I knew that was the preview theatre in the basement of Hammer House…