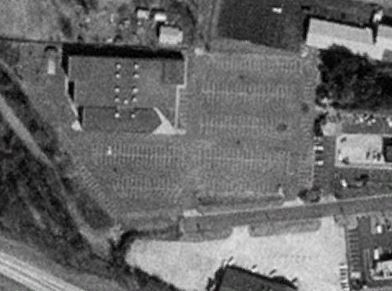 Located off New Hope Road near Interstate 85, the Litchfield Cinema 4 opened on December 10, 1982 as Gastonia’s newest and greatest entertainment complex. Operated by Fairlane-Litchfield Theatres with the grand opening showing of “48 Hours” starring Eddie Murphy, “Airplane II:The Sequel”, “An Officer and a Gentleman” and “The Last Unicorn”.

Fairlane-Litchfield Corp sold most of their screens to United Artists in the mid-late 1980’s. Their corporate management began operating and rebuilding a new company called Litchfield Theatres LTD, going in to markets they had not been in… Nashville, the Atlanta area, and Florida, and a few other locations. I worked for them, helping to open the Courtyard 8 in November of 1988.

Foster McKissack was the main man at the Litchfield organization. Ulmer Eady was head of operations. Originally located in Easley, SC… the operation later moved to Litchfield’s resort on the SC coast, Litchfield By The Sea.

McKissack was killed in a plane accident at the small airport there. The plane overshot, and landed in the ocean. I was told his body was never recovered. Shortly after that, Litchfield’s screens were bought by Regal… who also later bought United Artists.

McKissack would whip out his white gloves when he came to one of his theatres for a visit. And, yes, he used them.

So why isn’t Litchfield listed in the ‘chains’ listing?

Litchfield may be added when these pages are updated GM.Thanks for adding this info.

Thanks GMNash,interesting story I somehow missed.

It appears that Google Earth shows this location is demolished.

This theatre opened WAY before 1990. I have found the original ads for this cinema and will be revised once I scan the advertisement for its grand opening. In fact this movie theatre opened sometime during the early 80’s.

THE LITCHFIELD CINEMAS originally opened to the public on December 10,1982 under Fairlane-Litchfield Theatres. The premiere attractions for its official grand opening were on Screen 1 “48 Hours”; Screen 2 “The Last Unicorn”; Screen 3 “Airplane II:The Sequel”,and on Screen 4 “An Officer and a Gentlemen”.

By 1988 it was acquired by United Artists Theatres who changed the name to the UA Litchfield Cinemas 4 and it remained that way until it close in 2004.

I have the ads from its grand opening. See me if you need additional information at