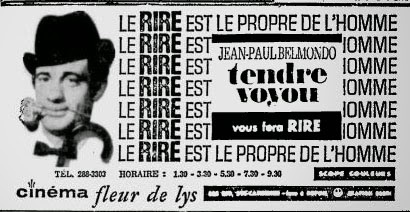 In 1990 Famous Players sold the theater and it became Cinema Quartier Latin. The 603-seat theater closed in 1994.

Correct spelling of theatre name is FLEUR DE LYS.
Reopened a few years ago as the still very popular after hours nightclub STEREO (capacity 1200) The interior was very plain and has been retrofitted. The original ticket booth is still used to sell tickets. DJ Angel Moraes was a former owner. It’s claim to fame is: “Stereo’s sound system, the #1 rated analog sound system in the world."
Photos of the current interior can be viewed at:
View link

You can’t see anything.

The facade of the theatre remains virtually unchanged. It features a large bas-releif poured concrete sculpture in a vaguely haida style that has been appropriated into the brutalist vernacular of the building. The entry vestibule preserves the terrazo floors, which feature steel fleur de lys insets. The original massive oak ticket booth remains, and the poured concrete details in the stairwell remain unpainted and original, as do the solid oak handrails, and the suspended oak ceiling treatment.

The original tile decoration in the stairwell was (unfortunately, and under protest) removed in 2000 to make way for a new coatcheck, and the rest of the theatre has undergone extensive modifications including new walls, and the leveling of the floor. The condition of the space when the club began construction necessitated the majority of this work. The bathrooms have been renovated, and the original candy counter has been removed.

Wherever possible, a genuine attempt was made by the original management to preseve the character of the theatre, and its brutalist style elements, which recall the work of Louis Kahn. Cosmetic details such as carpet, fiberglass furnishings and lighting have been removed and replaced, although in many instances the original structure exists buried under paint and other structures. Oak details removed from the main space have been re-used as benches in the club.

Stereo is currently open to the public, and continues to use the space and preserve the theatre, and many of its characteristics.