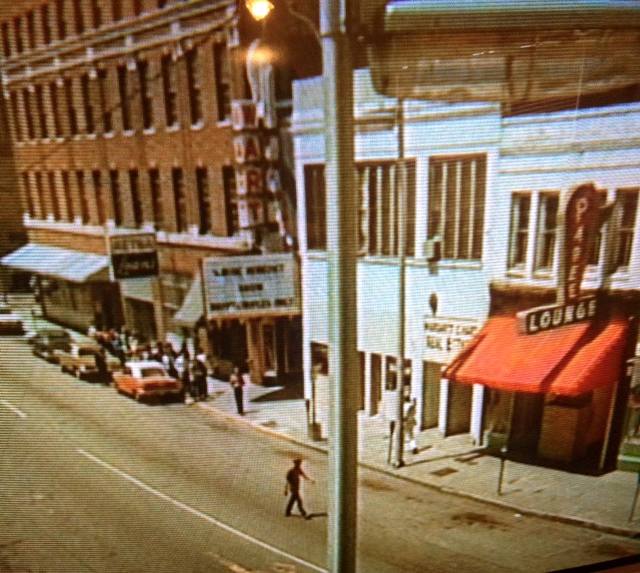 Often forgotten in discussions of the opulent (and connected by passageway) Paramount Theatre, the Hart Theatre was opened June 21, 1941 as a pure movie theatre with a showing of "Meet John Doe." It was operated by Paramount Pictures Inc. through their subsidiary E.V. Richards (who also operated the Paramount Theatre). It had a miniscule facade and entrance for such a large building. The main area of seating in the Hart Theatre was backed by a large stadium-style rear portion. Patrons entered from Convention Street down a long hallway to the concession stand, and then into the auditorium in between the main and stadium sections.

The Hart Theatre played the biggest and best of new releases into the early-1970’s, when it began to lose some of its drawing power. Big hits were still to be found throughout the mid-decade, but second runs and many second-tier martial arts projects often filled the bills. Still popular to the end, however, were the "Loose Late Shows" on Saturday. Some of Richard Pryor’s biggest hits of the late-1970’s (notably "Which Way Is Up?" were among the last big moneymakers at the Hart Theatre.

The Paramount Theatre had closed it doors in October 1978, but the Hart Theatre plugged on for another couple of months. After booking one of the bigger potential hits of the Christmas season with "Force Ten From Navarone" the theatre announced its closing right around New Year’s Eve.

By September 1979, Baton Rouge movie fans mourned the rubble that became the entire half-block of downtown that had housed these two great theatres thanks to the wrecking ball.

What a surprise to find this great old theatre featured in the opening scene of “Last of the Mobile Hot Shots,” the Tennessee Williams adaptation with James Coburn from 1970. Though set in the New Orleans and plantation areas, the production designer, Gene Callhan, was a Baton Rouge native and obviously had the idea to use the marquee and facade to suggest a television station (WART) with the H covered by a W to match the other letters.

I was just reading about the restoration of the Lakefront Airport in New Orleans, and about some of the Xavier Gonzales murals inside. I was suddenly reminded of a beautiful mural depicting the city of Baton Rouge, that was inside the lobby of the Hart Theatre. It showed the Baton Rouge skyline, including the old and new state capitol buildings, as well as enormous round tanks over at the Standard Oil refinery. I am not sure who painted the mural – it may have been by Gonzales, or by his friend and colleague Conrad Albrizio. Albrizio is remembered today for his murals inside the lobby of the new state capitol building in Baton Rouge. Albrizio and Gonzales both painted murals inside Louisiana post office lobbies during the 1930s.

My mom just told me that her mother, Lenora, worked at the Hart first as an usher and later behind the concessions counter in its early days. My mom remembers going there and also to the Paramount as a child. She has a vivid memory of one moment at the Paramount during a showing of ‘Frankenstein’. She was seated in the back row of the theatre, completely engrossed in the movie. When, out of nowhere, an actor dressed like Frankenstein reached through the curtain behind her and grabbed her by the shoulders. She said it scared her half to death and the scream it elicited was blood curdling!

The Hart also played a role in a slice of our family folklore that involves my dad, Elliott, and an old Air Force buddy reuniting in the middle of a comedy showing at the Hart one Sunday evening. My father’s laugh was rather unique and during a particularly funny part of the movie this guy stands up and shouts out ‘Hey Frenchy! That must be Frenchy, no one else in the world can laugh like that! From what I understand, that stopped the show and got the whole audience laughing and clapping as these two friends reunited. The last time they had seen each other was in Okinawa, Japan during the Korean War. Thanks to the Hart and my father’s wonderful laugh two friends got the chance to reunite after almost 14 years.

Like the Hart Theatre, my grandmother and my father are long gone, but I love the connection they all share.