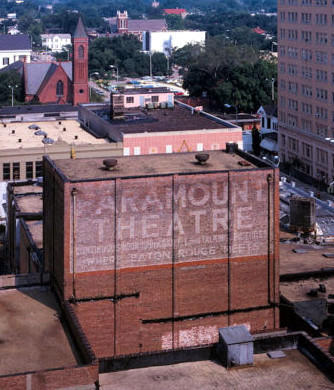 Once described as the most thoroughly equipped and scientifically built motion picture play house in the South, this theater replaced the old Columbia Theatre after its 1919 demolition.

The new Columbia Theatre was opened September 4, 1920 with 1,451 seats, and was the first theater in the United States to have lights lining the aisles.

It was renamed the Paramount Theatre in 1929.

The Paramount Theatre was demolished in 1979.

CL, Did you mean to post this on the Varsity’s page or is there a connection to the Paramount?

Oops. sorry! You are correct, I meant to post this on the Varsity’s page…

I have many fond memories of the Paramount and a child growing up in Baton Rouge. The most vivid is when my father and I were at Gone With the Wind in the mid ‘70’s. The movie was delayed in starting, no one could understand why. Finally, 3 rather large gentlemen in suits came into the theater and checked everyone out. A few moments later, Gov. Edwin Edwards walked in and sat 2 rows in front of us.

The Paramount was such a beautiful theater. It broke my heart to see it torn down. I never really understood why.

Did the movie “The Long Hot Summer” make it’s world premiere at the Paramount?

Funny, the archive picture shows Sgt. Pepper on the Theatre Marquee – I saw Sgt. Pepper at the Paramount a couple of times. Sitting in the balcony near where the second archive photo was taken…

The Paramount Baton Rouge had a very nice 2 manual 7 rank Robert Morton theatre organ. It was recorded by Dalton McAlpin in the 1960’s and issued on a couple of Concert Recording LP discs

I remember the “crying baby” room behind the first balcony. It had all the heavy drapes that just looked like a hand with a dagger might come out at any moment. I also remember the ancient little ladies at the ticket booth and the concession stand.

I remember my Dad taking me to the Paramount when I was 6 years old in 1960. It would be the Saturday morning matinee with the red velvet ropes and carpet and curtains. That is where my love for the movies started. I’ll never forget those times.

The Paramount was a grant theater and reopened under the Paramount name after the very old Columbian(?) theater was rebuild. When to many movies at the Paramount in the 60’s and 70’s.

This web page has a few photos of the Paramount, plus what appears to be a pre-1919 photo showing the original Columbia Theatre when it was a ten-cent movie house.

A two-manual, six rank Robert Morton organ, opus 2412, was installed in the Columbia Theatre in 1926. In a later restoration, the console was replaced by one from the Paramount in Clarksdale, Mississippi. The page linked in paragraph one has a link at the bottom leading to a page that links to an audio-only recording of the organ, played by the Paramount’s house organist, Dolton McAlpin. It’s quite impressive. The organ pipes and chestwork were later installed in a private home in Jackson, Mississippi.

This article mentions that the Columbia became the Paramount in 1929.