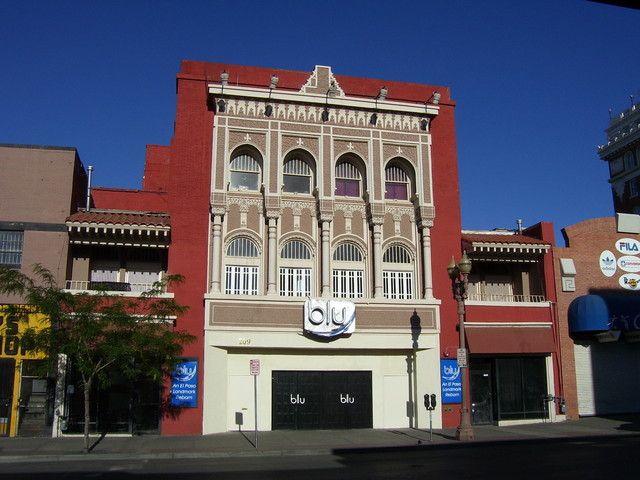 Built in 1914 by Henry Charles Trost as the Alhambra Theater, the Moorish style movie theatre was opened August 1, 1914 with “Nero and Brittannicus” on the screen and vaudeville on the stage. It was renamed the Palace Theatre on November 6, 1920 reopening with Gloria Swanson in “Something to Think About”.

After decades showing movies, by 1968 it ended its days as an adult movie theatre as the Palace Adult Theatre which closed on August 30, 1984 with Pamela Mann in “Unthinkable” & Carol Connors in “Desires for Men”. In July 1986 until 1990 it became a live music venue named Palace Theatre. It was renovated and reopened on August 2, 2000 as the Xscape, an upscale nightclub. Since then it has had several names including The Zone and Blu.

I passed by the old Palace on Monday. It’s no longer called The Zone anymore. Now it’s some club called Blu. That’s the fourth club to open there in about ten years. I bet this one doesn’t last another year.

Club Blu closed a few months ago. I can’t brag about my prediction since it was obvious to anyone who knows the history of most downtown clubs. I drove by the old theater 4 days ago and took a picture. Unfortunately I have nowhere to post it, but it does look nice except for the big yellow sign advertising the vacant building as FOR LEASE.

Henry Trost, was the architect of the Palace Theatre. Between 1903 and his death on September 19, 1933, his firm designed hundreds of buildings in the El Paso area and in other Southwestern cities including Albuquerque, Phoenix, Tucson and San Angelo, Texas. He had a studio with living quarters for his students adjacent to his house in the Sunset Heights neighborhood of El Paso.
Next door to the Palace in the basement there used to be a bowling alley. I would go there to bowl “duck pins” which are smaller than regular bowling pins and the ball is smaller. They also sold sandwiches…hand-cut salami was my favorite. This was in the 50’s.

From the 1920s a postcard view of El Paso Street along with the Palace Theater in El Paso.

Since its renovation it’s been a series of open and closed clubs. Cynthia Farah Haines has a good write up on it in her book “Showtime! Frome Opera Houses to Picture Palaces in El Paso” (Texas Western Press, 2006).

Back in the early 50’s when I worked at the Plaza theatre, the projectonists were unionized. I knew one who was a projectionist at the Palace. His name was Joe Birdwell. Don’t know whatever happened to him.

This opened as the Alhambra on August 1st, 1914. Grand opening ad in the photo section. 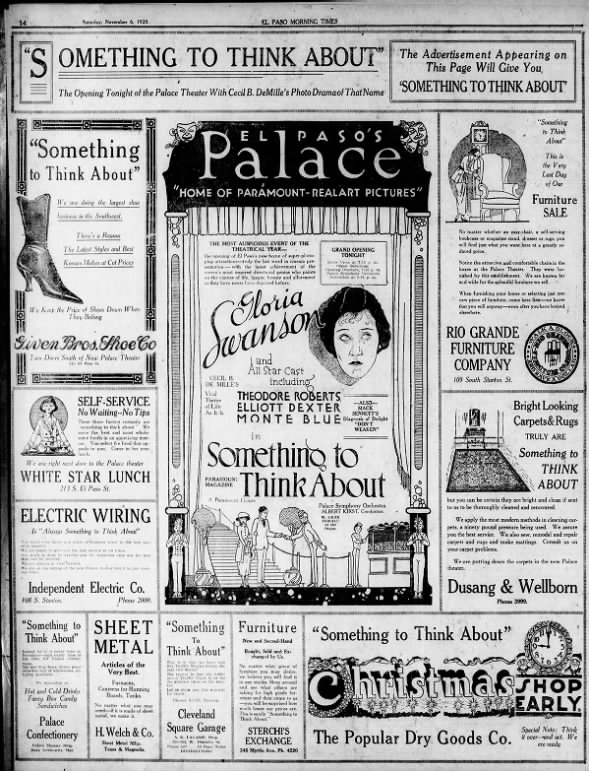 Can be added to Interstate Theatres Circuit which converted it from a family theatre in 1966 to sub-run discount house to adult X-Rated cinema during the porno chic era by 1968. In 1975, it was rebranded as the Palace Adult Theatre through August 30, 1984 at the end of its lease ending with Pamela Mann in “Unthinkable” and Carol Connors in “Desires for Men.” In July of 1986, it became a live music venue through 1990 as the Palace Theatre. After a period of inactivity, it became a Latin America music club opening on August 2, 2000 as Xcape D' Club. In the 2010s, it was known as Tricky Falls, another live venue which closed in October of 2019. As of 2020, it was not operating.