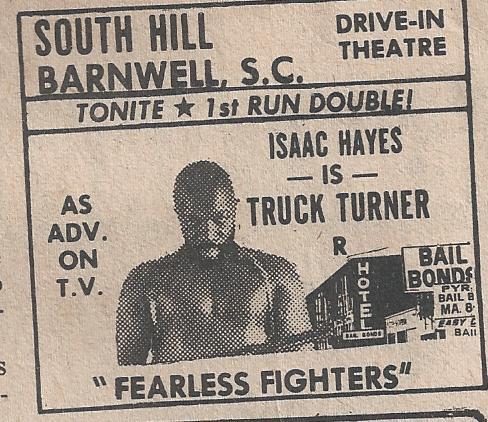 One thing was certain, within a 40 mile range of Augusta, GA there were 24 drive-in theatres.

Quite a few were on the South Carolina side near the bomb plant in Jackson, S.C. I guess quite a few engineers took in a drive-in show after work.

Serving the east side of the bomb plant was the South Hill Drive-In in Barnwell, S.C. It parked 225 cars and was owned by Mrs. Sam Garber and stayed in operation until closing in 1979.

In fact it had Barnwell’s first run of the Issac Hayes movie "Truck Turner" and the second feature was "Fearless Fighters." Both were rated R.

By February 1977, it was running the movie on Bigfoot, "Sasquatch" which also opened at Augusta’s newest theatres Columbia 1 & 2. Couldn’t believe such drive-in product would be booked into a new theatre! It also opened at The Cinema in Aiken.

Of the three drive-ins in Barnwell the South Hill Drive-In was the last to close!

Had just a little bit more to add on this one.I was glad i found the TRUCK TURNER newspaper ad. Remember to do the Tenn.Drive-ins.thanks Nick.

thanks Chuck, I figured it closed sometime around the late 70’s.don’t have anything else on the STARLITE or SWEETWATER Drive ins in Barnwell? Do you?

There was one drive-in south of town on US 278. The site hasn’t been redeveloped and the ramps are still there. This theater’s address is 7671 Marlboro Avenue. I couldn’t find the locations of Barnwell’s other two drive-ins.

best I could do at least there is something…