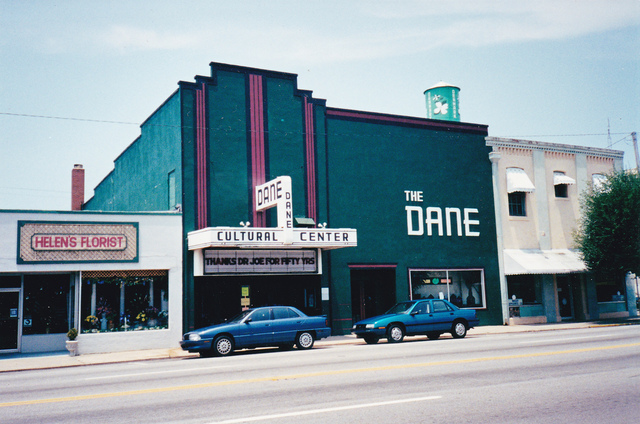 In the 1950’s, the 700 plus seat Dane Theater was the largest movie theater in the Denmark, SC area. After closing as a movie theater, it sat vacant for a few years. Today, its original Art Deco style has been restored and it is currently used as a a cultural center.

There is a photo of the Dane on this page:
http://tinyurl.com/yrtqxn

I found a picture to of the Dane Theatre.on the marquee it reads “SUMMER IN THE CITY” couldn’t find that movie title,so maybe it was a local production. My picture does not have Cultural Center sign on it.Nick, if you see this you have the picture cause you took it and sent it to me.

The Dulamae Theatre, currently given above as an aka for the Dane, was actually a different theater. Boxoffice of February 15, 1947, said that when Frank Lundy opened his new Dane Theatre he would operate the Dulamae only on Saturdays. Boxoffice of February 22 said that the Dane had been opened on February 17. The May 10 issue of Boxoffice mentions Frank Lundy as operator of the Dane and Dulamae theaters at Denmark.

However, in a post on a Facebook page about Denmark, a lacal named Eddie Hightower says that after Freank Lundy closed the Dulamae Theatre, a few local men reopened it as the Joy Theatre. I haven’t been able to find the Joy mentioned in Boxoffice, so I have no idea how long it remained open.

Boxoffice of June 19, 1954, reported that Harris Theatre Sales had sold CinemaScope equipment to the Dane Theatre. It didn’t say whether or not the equipment had been installed yet.

Now playing everywhere and at the DANE THEATRE on 5-27-77 “SMOKEY AND THE BANDIT”.