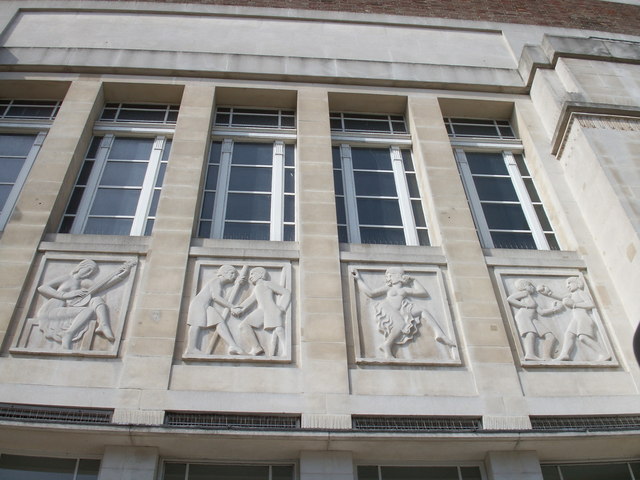 Located in the east London district of Mile End. The original Victorian-era People’s Palace was designed by E.R. Robson. It was built in 1886, and seated 2,500. It was opened by Queen Victoria on 14th May 1887. It was in use as a cinema by 1914. It burnt down in 1931. The façade was retained and today forms the main frontage to the Queen Mary College of the University of London.

A new modern People’s Palace was built in 1936 adjacent to the left-hand side of the original building on land which had previously been a formal garden. The opening on 13th February 1937 was performed by King George VI and Queen Elizabeth. The building was designed by architectural firm Campbell Jones, Sons, and Smithers. The exterior facade in white Portland stone, has a series of seven base-relief panels by sculpture Eric Gill which depict figures playing musical instruments, boxing and dancing etc.

The interior decorations were designed in a lavish Art Deco style by noted cinema architect George Coles. Inside the auditorium seating was provided in stalls and circle levels. It has a 46 feet wide proscenium, a stage 36 feet deep and there are seven dressing rooms. It has a fully equipped stage and fly tower. On the right hand wall of the auditorium there were originally three large painted murals by artist Phillis Bray which depicted aspects of dance. The auditorium contains a concert organ manufactured by Rutt & Co. the console is located in the left-hand side stage box and the organ chamber is above the right-hand side stage box. The building also contained a cafe and a ballroom.

The People’s Palace was not a full time cinema, as it mainly staged many live performances, pantomimes, operas, choral concerts, meetings and public events. It was however fully equipped for cinema use and regular ‘special’ film presentations were held there. The stalls floor is level, and when not required, the seating could be removed and stored in the basement.

The People’s Palace was closed in 1954, and was subsequently taken over by the adjacent Queen Mary College of the University of London. It is now known as the Great Hall for the University, and serves a multifunction use, and is occasionally open to the public when concerts and special events are held.

It was designated a Grade II Listed building by English Heritage on 25th February 2009.