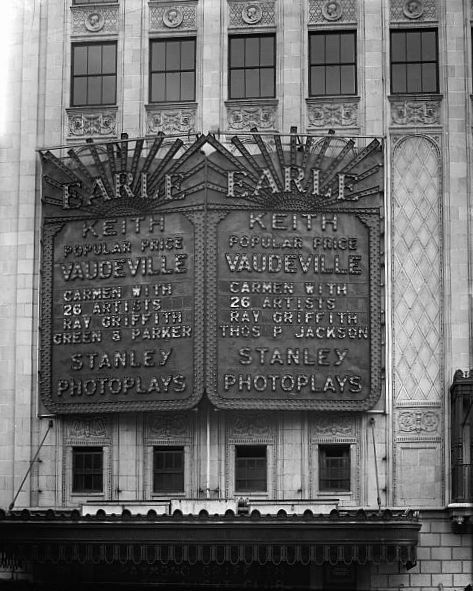 A grand movie palace in the nation’s capital, the Earle Theatre was opened on December 27, 1924 presenting 7 acts of Keith vaudeville plus Stanley Photoplays. It had a seating capacity for 2,240 and was equipped with a Kimball 3 manual, 10 rank organ. Fronted by a ten-story office building, there was a 1,500-seat roof garden and a ballroom in the basement. It was taken over by the Stanley Company in 1928 and later that year became part of Warner Bros. Circuit Management Corp. It was renamed Warner Theatre in 1947. It was closed for two years from 1971. It was taken over by a new operator and reopened in 1973 screening X-Rated movies and live soul music concerts. In 1977 it began presenting stage shows and concerts.

Following a $10 million renovation in the summer of 1992, its grand lobby, balconies and large auditorium make it one of the crowning jewels of DC. Movies, sadly, are no longer exhibited at the Warner Theatre.

I thought the Wang Center finished their classic movie series years ago & there are no more movies there.

The first movie I recall seeing here was Hello Dolly starring Barbra Streisand. It was amazing to watch from one of the upper tiers of the theater. The film is wonderful for many reasons, but I can still recall the opening credits as the train runs along the Hudson River. The sound was incredible! After the movie ended my mom and I exited the theater on Pennsylvania Avenue, and waited for the bus to take us back home to Glover Park. The snow set in, and the city was suddenly all quiet in the blanket of snow.

I also enjoyed Oliver here, and recall the warning at the beginning of the film … Beware .. for it is the Anniversary of Charles Dickens death .. all that white font on the screen against all of that black on the screen, and the music just about to begin the film.

I also enjoyed the restored version of A Star is Born here with Judy Garland and James Mason. Mr. Mason actually attended this event and you had to have special tickets to the performances. It was so great to watch it and to hear it on the big screen in stereophonic sound.

I grew up in Bethesda and remember hearing my parents talk about movies at the Earle. When the Warner converted to three-projector Cinerama, I saw “This Is Cinerama” there shortly after it opened when I was 10. I still have the original program. I saw several other Cinerama films there (“Windjammer,” “South Seas Adventure'). The Cinerama films ended at the Warner in the fall of 1959. The 3 hour and 40 minute cut of "Cleopatra” played there in an exclusive roadshow engagement for some months. Perhaps the most exciting Warner Theater moment for me was the first Saturday night screening of “My Fair Lady” there. As I walked through the lobby at intermission I almost walked in Jack Warner himself and Jack Valenti. The Ontario (which had “Lawrence of Arabia” in its roadshow run) and Uptown (which installed Todd-AO for “Oklahoma!,” “Around the World in 80 Days” and “South Pacific”) were other big-screen theater that had 70mm installations. As downtown DC ran down, and all the old movie palaces were torn down (Capitol, Palace, Columbia), the Warner lost its cache and turned into an exploitation and grind house. The Ontario was in another neighborhood that decline and went dark. That left the Uptown, which converted to three-projector Cinerama in 1961, I believe (I remember seeing “Wonderful World of the Brothers Grimm” there and “How the West Was Won”), then single-projector Cinerama (“Mad World” through “Ice Station Zebra”). I probably was “2001” there half a dozen times or more in its year long run. The Cinerama screen was replaced but the Cinerama screen scaffold and track were still in place when I saw “2001” there in 2001. Now I understand all that gone and so has film, which all shows now in digital format.

Short video clip ( 30 sec. ) of President Eisenhower attending a 1955 showing of “This Is Cinerama” at D.C.’s Warner Theatre can be seen at this link: http://www.britishpathe.com/video/ike-sees-cinerama-film-performance/query/dwight Lowell Thomas is seen in this clip with Ike along with Stanley Warner V.P. Harry Kalmine in front of theater…Nice clip with footage of Warner frontage.

The firs film I remember seeing at the Warner was “Seven Wonders of the World” in 3-strip Cinerama. Later “Ben Hur”, “El Cid” and “Dr. Zhivago” during their roadshow engagements.

In the late 1960s while working as a projectionist I learned the booth at the Warner (among others). It was equipped with Norelco DP70 machines and Ashcraft lamps. “Pop” Shannon was still the projectionist and at 90 years old and was hefting those huge reels like a 30 year old. He had some great stories going back to the days when it was the Earle. He said projectionists actually got a raise during the depression.

I also worked many of the downtown theaters before they all but disappeared. Greatly missed!

To Howard Bass: When I wrote this in 2011 they were still showing films with the classic film festival that summer. I had just taken my wife and daughter to see a very poor 35mm copy of Sound Of Music hosted by Frank Averuch(Bozo the Clown). Shortly After I wrote this they removed equipment and moved the film festival to the Coolidge Corner theatre for 1 season. We no longer have this movie festival at any area theatre. What a shame. The Coolidge can still show 70mm. They had a 3 week run of the Master awhile back. They install 70mm projection occassionally.

in the intro it states that in 1973 this theater started
to show X rated films. does that mean legitimate X rated
films like The Last Tango in Paris or do does it mean
actual “adult” films.

actually the most recent movie screenings here was in August 2016 for the Alamo Drafthouse Cinema chain exhibited a traveling roadshow showing of the “Star Wars Trilogy: A New Hope, Empire Strikes Back, and Return of the Jedi”