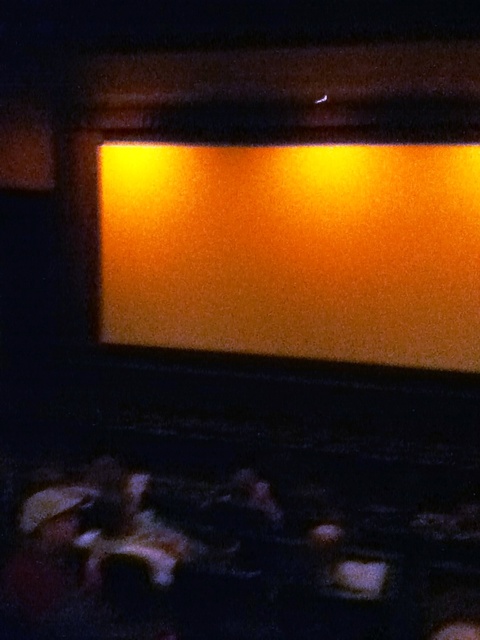 The E Street Cinema is located in the Lincoln Square Building(555 11th Street, NW), with its entrance on E Street between 10th and 11th Street, one block from Metro Center Station and four blocks from the Gallery Place/Chinatown Station. The Lincoln Square Building is new, but saved many historic facades. There is an escalator and stairs to take movie patrons one level down to the theatre.

This theatre was announced as early as 2001, but though the new building opened, the theatre did not open then. Like many movie theatre chains, Landmark was in bankruptcy. The E Street Cinema opened January 9, 2004. The theatre was designed by Graham Little Studio designer Brooks Graham, who designed many Landmark theatres.

Finally gave them another try with “The Raid: Redemption” back in March. No problems whatsoever. Really impressed with the quality of the print. Also a great movie.

My friend and I saw a free screening of a new Chris Rock movie “2 Days in New York” on film. For a new movie, I cannot believe the scratchy print that unfolded before my eyes. Not sure whom to blame, being new perhaps the people in the booth mishandled it. Being used to digital, the scratches did detract but one gets accustomed to it.

The film went on too long anyway and will not add anything to Chris Rock’s career. After seeing it, I felt like I needed to shower with all the talk of sex, pot and a French family with hygiene issues.

As previously blogged here, for those fans of movies, join Landmark’s film club and get invites to free screenings like this one. Most are pretty good.

I love this theatre, though, I must admit, more for the films they show than the audio/visual presentations. Most of the screens are, of course, small (house number five is one strange experience!), and I have experienced scratched/dirty prints, particularly when seeing a very small movie being shipped from Landmark location to Landmark location for one-week-only runs. Nothing too bad, though. I would give the E Street Cinema a rousing 10/10 for selection and a solid 7.5/10 for projection, sound, and comfort.

I really try to avoid screen 5 if at all possible, screen 6 must be directly behind it.

The conversion happened – all the screens can playback in DLP digital projection via Barco projectors. Next Friday’s ‘Samsara’ will be 4K DLP [thumbs up!]

I’ll post back with some more info, since I was rudely bumped off the phone call with the manager about half an hour ago.

The new Paul Anderson film is supposed to play here and at Bethesda, in gasp 70mm. This should be interesting. Their screens are rather tiny.

JodarMovieFan, is “Licorice Pizza” the Paul Anderson film, to play here or Bethesda or both, in 70mm?

Howard, I see an advanced screening this Sat 12/11/21 at the AFI Silver at 7, but its sold out. Unless, the management is strict, I have seen people go into other auditoriums once they get into the complex. And, no, I’m not suggesting anyone do it either, but.. :)

Didn’t see anything at the local Landmarks as of this moment.

It appears they are opening small, in 70mm, and expanding.

JodarMovieFan, I saw “Licorice Pizza” in 70mm at NYC’s Village East. I document the 70mm screenings for the 70mm newsletter, so that’s why I asked. I was not aware either Landmark showed films in 70mm. The movie is worthwhile & looked great in 70mm.

Oh wow, Howard. Looking at my post from almost 10 years ago, one of his films must’ve played at the Landmarks here. Looking at Anderson’s bio, it had to have been The Master, which I do recall it playing 70mm and seeing it somewhere and posted it on the site commenting on its strange ending.

Perhaps closer to its Christmas release here, we’ll get maybe more than just the AFI’s 70mm print. On your recommendation, I will catch it probably at the Silver. I’m sure it will play in the historic auditorium.

I haven’t seen many movies this year post pandemic but it has more to do with working a lot rather than just going. Dune I saw on gasp hbogo on my iMac! And, yes, I was drawn into it but I know in a large film format like IMAX or AMC’s Dolby, it would’ve been quite immersive.