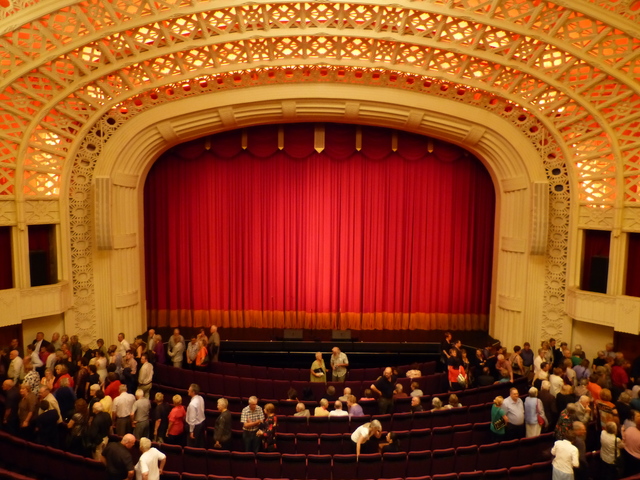 Toowoomba’s Empire Theatre combines the grandeur of a heritage listed Art Deco theatre with modern technical and staging facilities, which means that audiences can see the biggest productions in one of the most magical theatres in Australia.

The Empire Theatre was originally built and opened on 29th June 1911 as regional Australia’s largest theatre, originally with 2,200 seats, a title it still holds to this day. The original architect was George Lane. The building was all but destroyed by fire in February 1933, with only two side walls left standing.

The Empire Theatre was rebuilt to the plans of architectural firm T.R. Hall & Phillips and architect Guy Crick in the Art Deco style popular during the 1930’s. A feature of the 2,400-seat auditorium is the proscenium which is surrounded with a mass of lattice plaster decoration which is back-lit in ever changing colours. It re-opened on 27th November 1933 with the film “Tell Me Tonight” starring Jan Kiepura. It once again became the hub of the region’s entertainment and cultural life. The Empire Theatre featured live performances on its large stage, but mainly operated as a cinema. Many older residents of Toowoomba have fond memories of the theatre including the excitement of the introduction of “talkies” films with synchronised sound.

Gradually declining audience numbers and competition from the newer medium of television saw the Empire Theatre close on 1st April 1971 with the retirement of long standing manager, Mr Bob Dodd.

The building sat sad and neglected for many years, used as a warehouse and also by the TAFE College, until 1991 when the need for a performing arts centre once again saw life breathed back into this unique building.

The Empire Theatre underwent an award winning restoration by architectural firm Hassell, with modern facilities to compliment the Heritage listed, Art Deco foyers and auditorium. The venue re-opened in June 1997 and has enchanted visitors from around the world with its opulent auditorium and grand proscenium arch and unique “Bomber Light”. The Empire Theatre has once again taken its role as central to the cultural life of the community and hosts a wide variety of arts including Australian and international performers as well as local productions and school eisteddfods. The Empire Theatre is also a popular venue for conferences. Visitors, both national and international are impressed and delighted with the complex, ushering in a new era of entertainment and performing arts on the Darling Downs. A 200-seat Studio Theatre has been built at the rear of the building.

Wow what a large and unique lighted stage!

Did this theatre ever have a pipe organ? If so, what was it?

The website claims a chapel has been added to the Empire complex and that the chapel has a pipe organ. I am just curious about the
theatre auditorium itself.

In 1980 I was a drama student at Uni in Toowoomba and saw the inside of this theatre prior to any talk of restoration. I never thought it would ever be resurrected from the outrageous vandalism it had been subjected to during the time it sat silent. Anything within arms reach had been ripped up and smashed, the ceiling had huge gaps and 2 feet of rubble covered all floor space. In what had once been the main foyer, an enormous poster of Gone With the Wind framed in hundreds of gold-leafed cardboard crescents had been reduced to a barely legible image, only 3 or 4 crescents remained. A wall of original Coca-Cola mirrors, that had once decorated the refreshments area, were now only jagged bits of glass. The building looked in the last throws of death. I am yet to see the restoration except in pictures, but it’s a miracle that this art deco wonder rose again

Worked for (Colonel) Bob Dodd in 62 and 63, tough , fair person. I was 14, 4s11d a session. Loved it, loved the movies, still do, and so pleased to see the restoration of a grand cinema. Now I need to see a movie there.. if only I still lived locally.