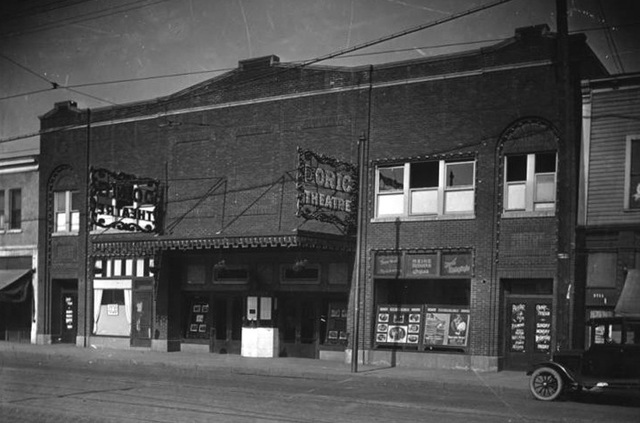 The Doric Theatre opened in 1920. Seating was listed at 800. The theatre was part of the Clinton Theatre chain.

The theatre closed October 18, 1958 with Jerry Lewis in Rock-a-Bye Baby". It remained unused until 1974 when it was converted to office space and houses an Insurance Agency and other offices.

The caption also says that the house might once have been called the West Duluth Theatre; but if it ever had that name, it had to have been before 1921. The Doric was mentioned by name in the January 29, 1921, issue of Domestic Engineering, which said that the Northern Plumbing Company had been given a $20,000 contract to install the plumbing and heating equipment in the Doric Theater at Duluth.

The Minnesota Digital Library dates this photo of the Doric Theatre 1919. They might be a bit early, as the Doric was probably the project that the October 18, 1919, issue of The American Contractor said was ready for bids:

In the photo, the theater looks like it’s already in operation, and it seems unlikely that the building would have been completed before the end of 1919 if it was only going out for bids on October 18. W. P. Allred was probably also the architect of the Orpheum Theatre in Fergus Falls, Minnesota, which is now the Fergus Falls Center for the Arts.

The Minnesota Digital Library also has a 1913 photo of a theater called the Alhambra. The caption says that it was also at 5715 Grand Avenue. If that address is correct, the Doric Theatre must have been either a replacement for, or an expansion of, the Alhambra.

The Doric closed October 18, 1958. The last film was “Rock A Bye Baby” (source: newspaper ads and article about closing). It was vacant until 1974, when it was converted to office-business space (source: building permits). Opened Thanksgiving Day 1920 (source: Duluth Budgeteer, 10-16-58), which is corroborated by city inspectors permit dated Nov. 24 1920 giving the theatre the OK to operate beginning the next day, Nov. 25. The MN Digital Library also has 1960-61 photos of the theatre front which are passable but not great. Go to the links mentioned in the other comments and then search for more.