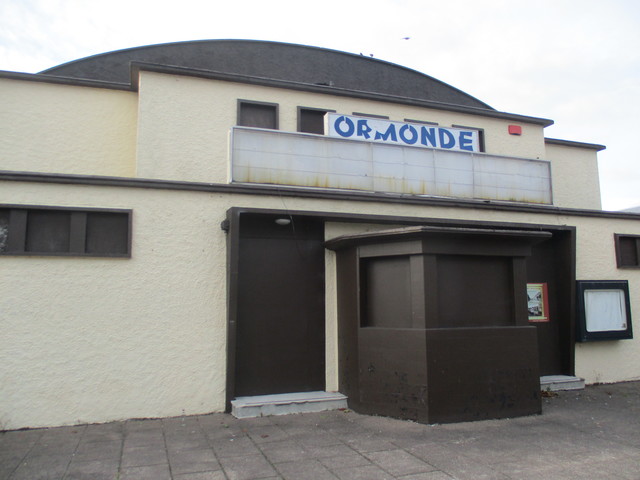 A small cinema located on Broderick Street in Midleton, County Cork. Originally built around 1946. The proscenium was 30 feet wide.

It was a family owned concern and was later twinned. It closed circa 2005, possibly due to the nearby Gate Multiplex cinema opening.

This former cinema location should be listed as Midleton, not under Mildenton!

I suspect that the former Star and Southern Star cinema was at the other end of the town, not the the Ormonde location.

There were two cinemas in Midleton. The ‘Southern Star’ was a silent cinema. It closed when the owner was killed by a lion in Africa, according to local gossip. (This is Ireland don’t forget!) It was still standing the last time I visited. It had become an auction room and it was at the Cork end of the Main Street. I remember that the projection portholes were still in evidence years after closure. It later was converted to a furniture store and evidence of its cinematic former self was lost.

The Ormond was according to local gossip owned by Conny Carey. It was built for “the Talkies”. It had a single tier with a shallow rake. The cinema was on a side street and the box office was situated on the pavement between the entrance doors. It was latterly operated by the |Green family. They partitioned-off the end with the splay walls and divided the auditorium into two narrow mini cinemas. The exterior from the back the cinema looked like a Dutch barn with a curved roof of corrugated concrete panels.

According to the on-line National Inventory of Architectural Heritage, the Ormande opened circa 1950. It is not listed in the 1940 Kine Year Book (KYB), but it is in the 1953 edition. It had a 30ft wide proscenium. The proprietor was The Southern Star Cinema Company; presumably that company built the Ormande after closing the Southern Star (which is listed in the 1940 KYB, but not in the 1953 edition.)

The Ormonde was managed in the end of its years by Pat and Kathleen Greene who closed it in April 2006.

This cinema is one of my favourite buildings and seems it might sadly be knocked down and replaced with apartments.

The photo I have added is of it being built in 1946 and is off the builders. It opened either 1947 or 48 and was built by O'Flynn B and sons. It had no section to buy sweets so two sisters who had a garage next to it sold them. The front faquade was made of concrete with the rest of it asphestos. It also held general meetings and events aswell as bingo.