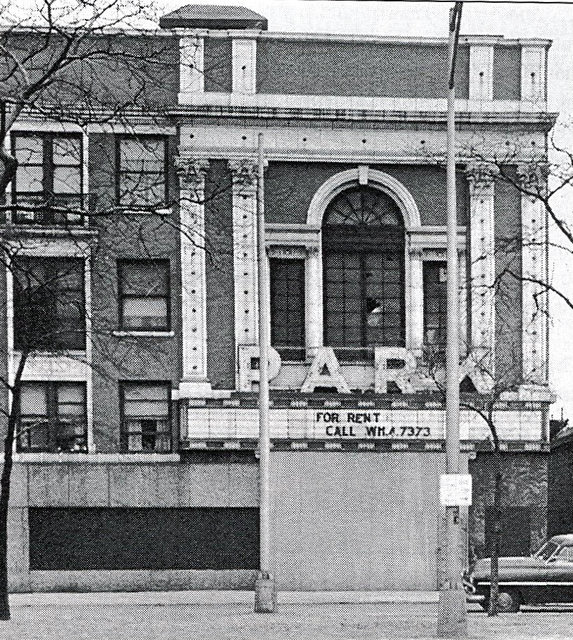 This South Side theatre was opened for the Ascher Brothers circuit in 1917 as the Grand Oak Theatre, and sat just over 900. Later that year it was re-named Peerless Theatre. It was located on Grand Boulevard (today’s S. Martin Luther King, Jr. Drive) in the community of Kenwood.

It originally presented both vaudeville as well as motion pictures. In 1924, a Kimball organ was installed at a cost of $10,000. Also, in its early years, the Peerless Theatre had its own house orchestra.

During the 1920’s and 1930’s, it occasionally played host to big-name jazz performers on its stage. The Grand Terrace Café, a jazz venue which also hosted some of the biggest names in jazz of the day, was in the same building as the Peerless Theatre.

Closed in 1928, it re-opened in 1937 as the Park Theatre which closed in 1958. It re-opened in 1964 as the Ritz Theatre but closed the following year. Later used as a church, the auditorium then stood unused. In recent years it has been used as a parking space for condominiums. In 2007, the front of the building is being converted into offices and the façade will be restored.

View link Here is the page on the condo development. One of the new businesses set to move in is a Roscoe’s Chicken & Waffles, which I think is the first in Chicagoland. I think the theater will be destroyed (If nature hasn’t already) but it looks like the lobby will be restored.

Ascher Brothers will add to their string of theaters the Peerless, on Grand boulevard near Fortieth street.

Here are photos of this theatre.

There was a Park Theater listed at 3955 S. South Park Avenue in the 1953 Chicago yellow pages. Was Grand Avenue called South Park at one time?

MLK Jr Drive was previously known as South Parkway and before that Grand Boulevard.

OK, thanks. It looks like South Park, but I guess that was an abbreviation. No longer listed in the 1960 directory.

The auditorium is still used as a parking space for the condos.
Here are two recent pictures :
View link
View link

I wouldn’t buy a condo with a parking garage like that. It looks like there is still pitch in the floor.

The dance palace that replaced the Peerless Theatre was called the Grand Terrace Ballroom. When Max Slott reconverted the building to theatrical use in 1937, the project was designed by Mark D. Kalischer. Boxoffice ran this article with photos of the reborn Park Theatre.

Here is the new Boxoffice link