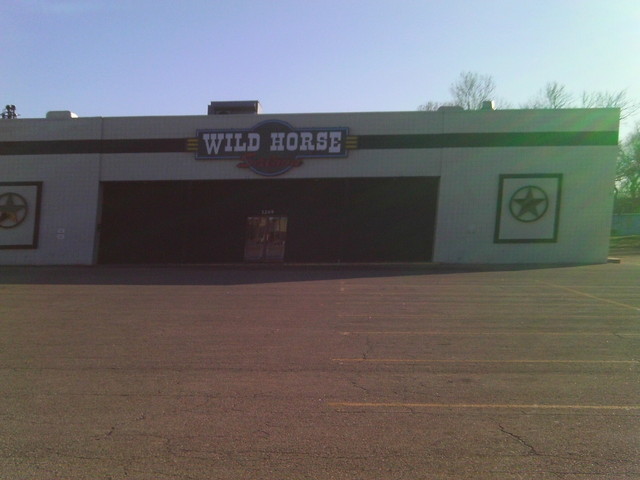 Topeka Boulevard Cinemas II opened October 16, 1974. It was nothing more than a very stark, white cinder block structure with two screens. In 1981 one of the screens was split into two screens and it became the Cinema III. The last time I was in this theatre was in 1991 for “Terminator II”, and the ceiling had multiple leaks.

Towards the end of it’s life as a dollar house and showing “The Rocky Horror Picture Show” (after the Dickinson closed). This theatre closed October 6, 1994, and is now a country music nightclub.

This theatre was built by Boston MA based General Cinema in the early 1970’s. The Topeka Boulevard Cinema originally was a twin and later the second auditorium was divided for a total of three houses. The interior was classic GCC featuring light gray seating and gray walls. This was the only GCC theatre in Topeka, GCC had other venues in Wichita, Kansas. The pictures that I uploaded show that the building and street sign are still in use, the building as a country western club and the street sign for the clubs advertising.

I will Favorite it since I once worked for GCC.Other GCC folks should Too.

Topeka Boulevard Cinema was originally a twin,as stated, but it was the larger auditorium that was split to make a tri-plex. I managed it for a couple years around 1985-86. The theater did very well competing against the Gage 4. Back to the Future (1985) sold out for weeks. Topeka Blvd was a major drag for teenagers on Fri/Sat nights, and we ran a very successful midnight film series during the summer, with Rocky Horror every weekend plus a mixture of rock and horror films.

I’ve done a little research from the Capital Journal archives to come up with a history of this theater which I remember from my youth:

The west auditorium was closed briefly in spring 1981 and was split. The Topeka Boulevard Cinemas I-II-III reopened Friday June 19, 1981, showing “Superman II,” “Bustin' Loose,” and holdover “The Night the Lights Went out in Georgia.”

A Capital Journal article on Wednesday Sept. 21, 1994 said the Boulevard 3 would close when the lease was up. Crown Cinema owner Richard Durwood stated that Topeka was unable to support two discount theaters.

Crown Cinema closed the theater on Thursday October 6, 1994. The final films were “Speed,” “Blankman,” and “The Flintstones.”

As of 2015, the building is still in use as a country and western themed nightclub.