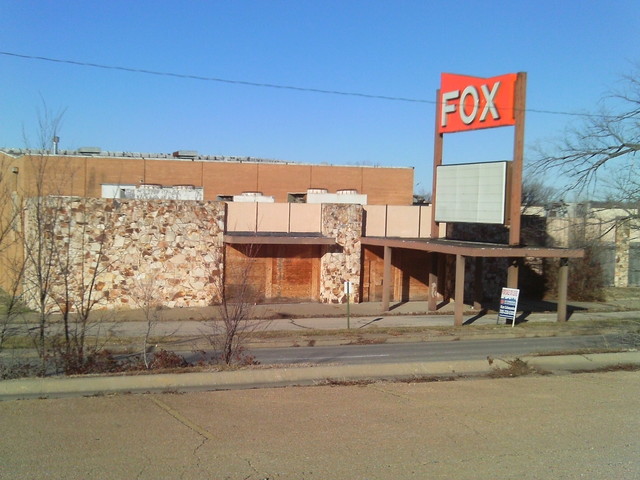 This theater started out as a 850 seat single screen auditorium, and was opened June 14, 1967 by National General Theatres. In 1977 the main auditorium was split into two screens, and two more smaller screens were added to the east side (each one about 500 seats or less). Owned by Mann Theatre from July 1973, they twinned the theatre in 1976. Later operators were Dickinson Theatres followed by Crown Cinema Corporation would shortly run this theater, until Hollywood Theaters would buy them out.

On 16th March 2004, the theatre would close for "renovations", but would never reopen. It currently sits vacant and in disrepair.

This theatre was originally built by National General Theatres and then operated by Mann when they assumed NGC. With the Dickinson buyout of Mann by Glen Dickinson Jr. it then was operated by Dickinson who later added two auditoriams to the building for a total of 4. This theatre was at the main entrance of the White Lakes Mall and was a free standing building.

According to the realtors web site, the theatre is listed for $425,000. It does not mention anything about the interior condition or what if any equipment may be left.

This theater is actually located just north of the old White Lakes mall, across the street from the former Sears. It opened in 1967 as an 850-seat single screen operated by National General. It was referred to as the Fox White Lakes because of its proximity to the mall, and because the mall owned the property. Mann took over operation of the theater shortly afterward. General Cinema opened their Boulevard Cinema I and II in 1974 just up the street, so in the fall of 1977 Mann closed the Fox in order to split the theater into a twin of 425 and 396 seats. It reopened in December 1977 showing ‘The Gauntlet’ and ‘Telefon’. Dickinson Theatres took over operation of the theater from Mann in 1980. In 1983 Dickinson wanted the mall owner to add two screens so they could stay competitive with the General Cinema theater, which had just split their twin into a three-plex. The mall was unable to finance the expansion, so Dickinson bought the property from the mall and built the addition themselves. These two new screens on the east end opened on August 17, 1984 seating 296 each. The first two movies in the new auditoriums were ‘The Woman in Red’ and ‘Sheena,’ and were the first in Topeka to feature Dolby Stereo surround sound! Crown Cinema bought the Dickinson theaters in Topeka shortly after Crown opened their new theaters at West Ridge Mall in 1987. At some point after Hollywood theaters took over from Crown around 1999, they closed the Gage 4, which had become a discount theater, and turned the Fox into a second-run theater. I believe the Fox was closed in 2004. There is a listing on loopnet with another good view of the theater looking northeast. At this time, the listing says the building is off-market. The abandoned mall and boarded up theater are among several buildings contributing to the general blight in the south Topeka area today.

The Topeka Capital Journal has a great slideshow of the Fox Theater over the years, including pictures of the original construction and grand opening festivities:

may have to cut and paste to view link

The timeline of the Fox Theater through Capital Journal archival research: The theater opened Wednesday June 14, 1967 with “8 on the Lam” starring Bob Hope and Phyllis Diller. National General was the operator for the first five years.

Mann Theaters took over operation of the theater from National General on Sunday July 1, 1973.

Mann twins the original theater and reopens on December 22, 1977.

Dickinson Theaters took over operation of the theater from Mann on Friday February 1, 1980.

Dickinson adds two more screens on the east end of the original building, opening on August 17, 1984.

Hollywood Theaters (Wallace) took over operation of the theater from Dickinson on Friday October 3, 1997.

Wallace closes the Fox Theater on Tuesday March 16, 2004 after almost 37 years of operation.

The theater was sold in a bankruptcy auction in 2015 for just over $27,000. Future plans for the building have not been finalized.

Thank you for the link to the slide show as well as your other comments. I worked with James Martin, “Speed” when he was the district manager for Mann in Wichita, KS. Please keep us posted on the progress of whatever is being done with this theatre. I know this situation in Topeka includes numerous properties and is a tragedy for the community as a whole,

Architect – Richard L. Crother & Associated of Denver with associate and local architect J.A. Dickerson of Topeka. The first indoor movie theater since 1932, it cost north of $500,000.

On April 25, 2019, a fire broke out inside the old Fox Theater. According to an article in the Topeka Capital-Journal, “Battalion Chief Chuck Gatewood said workers were cleaning the place and burning some debris in the old theater building” (!). Evidently the fire was put out quickly, reportedly causing some damage to the roof, but from the street view no fire damage is visible. The theater remains boarded up and extremely decrepit in appearance as of today. The article is at https://www.cjonline.com/news/20180425/topeka-fire-crews-respond-to-fire-at-old-fox-movie-theater