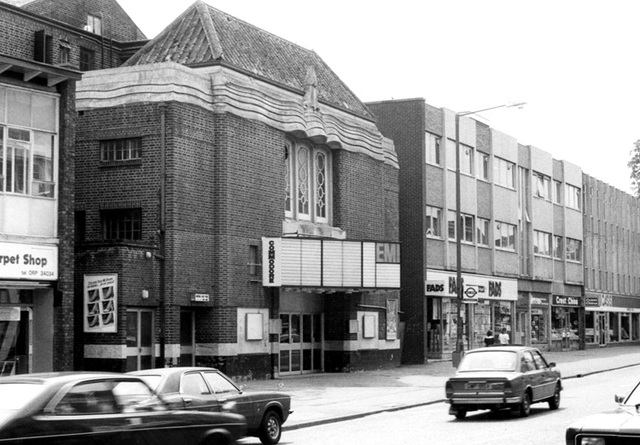 Located in Orpington, today a district in the south-east of Greater London. The Commodore Cinema was built and operated for most of its life by the local Spencer-May family. It was at the opposite end of the High Street to their Palace (later Carlton) Cinema. It was opened on 4th December 1933 with "Facing the Music" starring Stanley Lupino, who appeared in person to open the cinema.

It was a brick built building, which had a central window feature in white Portland stone, and a white stone border on top of the facade, which was topped by a tiled mansard roof. The Commodore Cinema was equipped with a Christie 3 manual, 5 ranks theatre organ, and it had a café located on the first floor.

In 1968, the Spencer-May family sold the Commodore Cinema to the Shipman & King circuit, which later became part of the EMI Group. They closed the Commodore Cinema on 8th May 1982 with Scott Glenn in "The Challenge" and the documentary film "Budo - The Art of Killing". It was demolished in June 1983. The Christie organ in now located in a private location in Derbyshire.