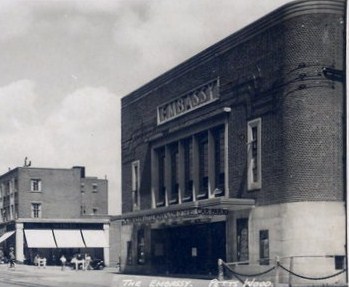 Located in Petts Wood, to the North of Orpington, Kent, today part of the southeast of Greater London. Prior to its opening, films had been shown in a local hall. The Embassy Theatre was opened on 12th October 1936 with Ronald Colman in "Tale of Two Cities". It was built for and operated by the Shipman and King Circuit.

The exterior was in brick, with white stone trimmings, and the name EMBASSY was set in stone, centrally placed over the first floor cafe windows.

Inside the auditorium, there were recessed coves across the ceiling which contained concealed lighting. There were large decorative panels on the splay walls each side of the proscenium.

In 1967, the Shipman and King Circuit were taken over by the Grade Brothers, and soon became part of EMI. Merged into the ABC Cinemas chain, the Embassy Cinema was closed on 14th April 1973 with "Snoopy Come Home" and "Mighty Mouse Playhouse". It was demolished and the site was redeveloped as a Safeway supermarket, which became a Morrisons supermarket.

A vintage photograph of the closed-down Embassy Cinema in 1975:
View link

The Embassy was not demolished to be redeveloped as a parade of shops called Chatsworth Parade. Chatsworth Parade (which was originally a terrace of houses with that name) is on the northwest side of the junction of West Approach and Queensway, whilst the Embassy was on the southeast corner of that junction.
The site-including its car park-was redeveloped and a Safeway supermarket built on the site, which later became Morrisons, which it still is today.