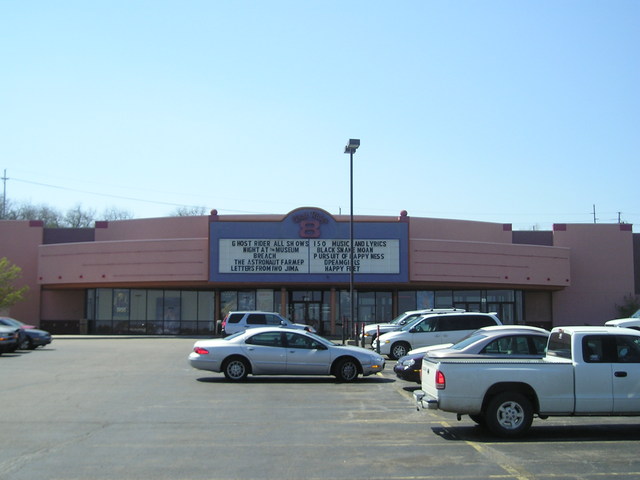 This eight plex was built in 1993, opening July 9, 1993 with 2,000-seats. It was added outside of the mall. This theater was very elaborate, with a chandelier in the spacious lobby, along with an arcade across from the concessions. The decorations are similar to those in the West Ridge 6 theaters.

In 2005, the much larger Wallace 16 was built (with stadium seating), and this theater promptly became a discount second run house, which it is today. The seating capacity has been reduced to 1,432

It was my understanding that when Wallace (Hollywood) built the new 16 screen theatre that they intended to close this theatre but ran into lease problems with the shopping center owners. There was some sort of clause that they could not open another theatre within ‘so many miles’ of the mall. So they opted to keep it open and reduced it to discount status.

The lease problems referred to above were actually with the 6-plex inside the mall. The mall threatened litigation, but the new 14-plex opened and the 6-plex closed shortly afterward, so I assume they worked out an amicable separation. This 8-plex is not actually owned by the mall. It is my understanding that Richard Durwood (who owned Crown Cinema), purchased the land and built the theater free of monthly rent. That would explain why it is evidently profitable as a discount house.

The West Ridge 8 outside the mall opened on Friday July 9, 1993. The opening films were “Rookie of the Year,” “Weekend at Bernies 2,” “Strictly Ballroom,” “Much Ado about Nothing,” “Sleepless in Seattle” on 2 screens, and “In the Line of Fire” on 2 screens.

Regal had been running 35mm at this theater into 2015 and it was rumored the theater would close. However, as of Friday April 17, 2015, all auditoriums are listed as digital, and the ticket price increased to $3.00. It looks like Topeka will continue to have a second-run theater for the forseeable future.

There was an article by Michael Hooper in the Topeka Capital Journal newspaper on Wednesday April 20, 2005, that said the West Ridge 6 would close on Thursday April 21, 2005.

It said that Coming Attractions Theatres Inc of Ashland, OR was interested in leasing the 6-plex space for a discount theater, but the mall was tied up in litigation with Hollywood Theaters (Wallace) over their premature exit.

Hollywood Theaters was acquired by Regal Entertainment Group in April 2013. Regal is still operating this theatre.