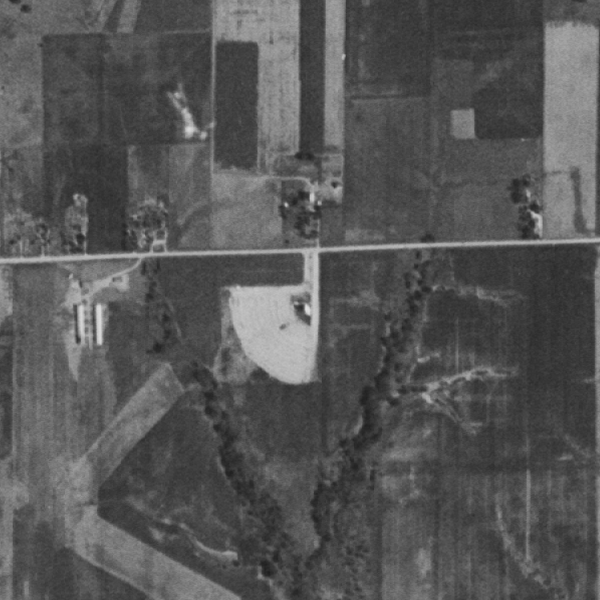 The Starlight Drive-In was included in the 1950 Film Daily Year Book drive-in list, the second in Topeka after the Community Drive-In.

The 1949-50 Theatre Catalog called it the Starlite Drive-In, capacity 500, owned by Claude Parrish, who also owned the Community Drive-In. By the 1952 Catalog, the capacity was 400, and the owner was John Basham, Jr.

The Motion Picture Almanac also listed the Starlight Drive-In with a capacity of 400. Its final MPA appearance was the 1965 edition.

On Aug. 8, 2018, the Topeka Capitol-Journal quoted local movie historian Joe Zima’s work, “Topeka has been the site of five drive-in theaters … The Cloverleaf Drive-In, Community Drive-In, Chief Drive-In, Corral Drive-In and Starlight Drive-In.” All five were listed in the 1955-56 Catalog.

I think I found this D-I on the 1948 Historic Aerial it looks as though it is still under construction. On Google maps the closest address is: 5801 SW 21st St, Topeka, KS 66604 which is Affordable Dentures, this is on the south side of SW 21st St. I-470 went right through the Middle of the D-I the field area covered most of the on and off ramps of I-470 in the area south of SW 21st St. If someone knows the years I-470 was built and opened maybe we could narrow down when this D-I Closed. Please change the address above to match the Affordable Dentures address this way the location will be easier to find.

Outstanding catch, Kris4077! I just uploaded a 1950 USGS aerial for that spot which confirms it, south of 21st St about halfway between Fairlawn and Wanamaker.

It’s Interesting that there was a cloverleaf Drive-In Theater in Topeka and the starlight became a cloverleaf for an interstate highway. Well at least it didn’t become a Walmart.