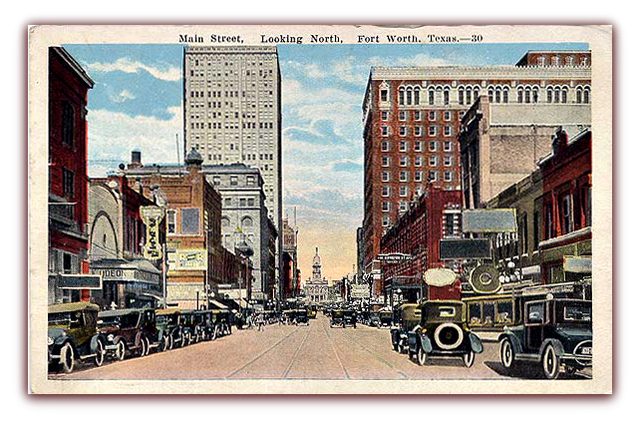 From 1930, a vintage post card view of Ft. Worth’s Main Street and the Odeon on the left side.

Don’s link got lost, so here it is again. Judging from the surviving landmarks, the Odeon must have been on the west side of Main Street in the block south of 10th Street (the 1100 block.) That would have put it across the street from the entrance to the New Liberty Theatre, which was in the second building south of 10th Street. Everything along Main Street south of 9th Street (including the street itself) was obliterated when the Tarrant County Convention Center was built.

Because the intersection of 10th and Main is entirely gone, Google Maps will never be able to find the Odeon’s actual location, so I’ve set Street View to the Convention Center’s entrance at 9th and Main Streets. The theater was a full block south of this location.

The book Fort Worth, Outpost on the Trinity, by Oliver Knight, Cissy Stewart Lale, says that the Odeon Theatre was built by J.S. Phillips in 1910, and was the first purpose-built movie theater in Fort Worth. I found the Odeon mentioned in the December 13, 1913, issue of The Moving Picture World, still being operated by J.S. Phillips, who was by then the national vice president of the Motion Picture Exhibitors' League.

Joe, if I may make a suggestion, Sanborn Fire Insurance Maps would be an excellent resource in discovering where the Odeon Theater may have been located. The Perry-Castañeda Library map collection at the University of Texas in Austin has a limited online archive. Also, the Fort Worth Library downtown can access more years of the Sanborn maps.

From the 1930s a postcard view of the Odeon Theater in Fort Worth.

Thanks for letting me know about UT’s online collection of Sanborn Maps, Larry. I wasn’t aware it was available.

The 1910 map shows buildings labeled “Picture Show” at both 1004 and 1010 S Main Street. The Odeon could have been one or the other of those, assuming the maps were not drawn before the theater opened that year. Unfortunately, the 1911 map set is missing the sheet the Odeon would be on, so I can’t check to see if it changed between 1910 and 1911. The 1911 set is the most recent the collection has available of Fort Worth.

The Fort Worth Library’s Sanborn collection is available online only to card holders of the library, and as I don’t live in Texas I can’t get access to it. The UT collection should prove be a helpful resource, though.

The Odeon (Healy) Theater was built by J.S. Phillips at 1004 Main Street and operated by R.A. Healy. It opened as The Healy on June 14, 1910, a very modest $20,000 house. Complete with a $3,500 Wurlitzer Orchestrian and a smoker gallery to add excitement to the nitrate film projection. But Healy decided to sell the theater just months later. When it was purchased on Nov. 12, 1910 by Elmore Callaway, he held a contest to rename The Healy and child Priscilla Sedgwick won with her suggestion of the Odeon. (A file in the pictures section shows this.) Healy built a larger house at 911 Houston Street which was dubbed The New Healy Show House and then shortened later to The Healy Theater. The Odeon was a survivor as it was surpassed in terms of architecture and technology in the silent era but managed to transition into the sound era within a very competitive downtown Fort Worth theatrical district before closing in the 1930s.