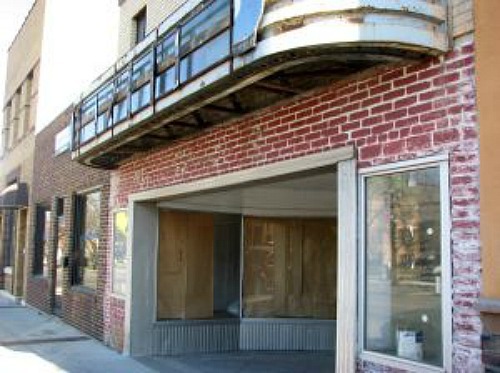 It was renamed Waseca Cinema in 1971. The building now houses the Waseca Family Dentistry.

The Fall, 2007, issue of the Waseca County Historical Society’s newsletter, History Notes (PDF here), has an article about the county’s movie theaters, and there is considerable information about the theater at 118 N. State Street. There are also five photos of it.

The house was opened by brothers Elmer and Bert Dawson on June 24, 1912, as the Palace Theatre. The opening attraction was a stage play, but the house offered movies and vaudeville as well. In 1920, the Dawson brothers sold the Palace to John and Frank Manthey, who operated it until 1929, when they sold it to Elmer P. Nelson. Nelson renamed the house the State Theatre.

The State Theatre burned on February 3, 1944, and was rebuilt and reopened as the New State Theatre on October 4th that year (the long delay was probably due to wartime restrictions on construction materials, rather than the extent of the fire damage, as the facade was largely unchanged at this time.) Another fire in 1971 led to another renaming, and the house spent its final years as the Waseca Cinema. The article doesn’t say what year the theater closed, but another source says that the last show was on Sunday, August 4, 1985.

The article also notes that the Park Theatre, at 218 N. State Street, was opened by Elmer P. Nelson in 1937. It also mentions two silent era houses opened in 1914— the Unique and the Regent— but doesn’t give their locations or say how long they operated.