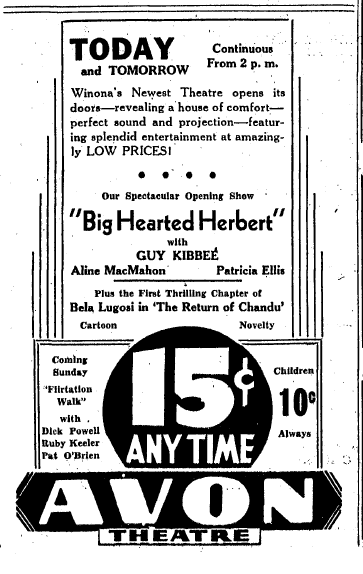 The Rex Theatre opened in 1935, and was renamed Avon Theatre by 1938. For most of its life it was operated by Minnesota Amusement Co.

The Avon Theatre closed on January 9, 1956 and was converted into a Woolworth’s store. It was later converted to the Islamic Center of Winona. It was destroyed in a fire on September 13, 2013.

The Avon Theatre actually opened in 1935 as the Rex Theatre but was soon renamed. The house is listed with both names in the finding aid to the Liebenberg & Kaplan papers at the University of Minnesota. It is listed as a 1934-35 project.

This theater opened as the Avon on Friday, May 24, 1935 (see posted ad). I can find no evidence of it ever being called the Rex.

I can’t recall my source for Rex Theatre being the opening name of this house, though there is a Rex Theatre at Winona listed as a Paramount-Publix house in the 1935 edition of The Film Daily Yearbook. As the yearbook probably went to press before the theater opened, but when it was already under construction, it’s likely that the owners simply decided not to use the name that was originally intended.

The Avon closed for good on January 9, 1956. The building and the one right next to it were converted into a Woolworth’s store which opened on July 19, 1956. I used to go to that Woolworth’s a lot when I was a kid in the 1970s.

Thanks for adding the closing date info. However, the opening date info should also be corrected. The Avon opened on May 24, 1935, it was never actually named the Rex, although it may have been planned at one time. Just wanna get all the info correct.