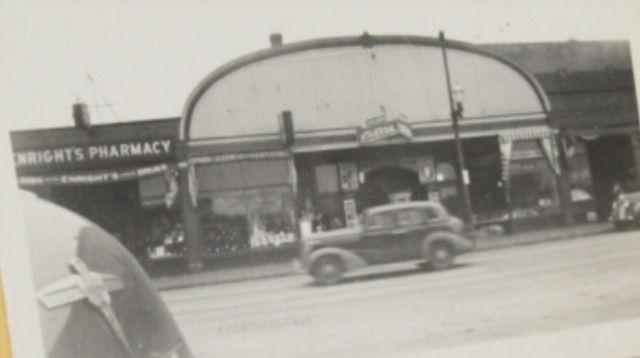 The Universal Theatre was opened October 20, 1914. By 1926 it was operated by E.M. Loew’s Theaters Inc. and they were the operators until the late-1940’s. It was renovated and taken over by an independent operator in 1955 and was closed in May 1960. It became a church, and was demolished in January 1970.

In the 1942-43 Motion Picture Almanac, the Universal in Fitchburg is listed as part of E.M. Loew’s Theatres of Boston. At the time, that circuit also ran the Lyric and the Majestic in Fitchburg.

The Universal is listed in the 1927 Film Daily Yearbook as having 745 seats and open 6 days/week.

The October 19, 1914, issue of the Fitchburg Sentinel said that the new Universal Theatre would open the following day.

No fewer than four good-sized new theaters opened in Fitchburg in 1914, perhaps a record for a city of its size. The other three were the Lyric (later the Saxon) on Main Street, Shea’s Theatre (later the Gem) on Day Street, and the Rambeau Theatre (later the Strand) in the Cleghorn Square neighborhood. Of these four, only the Rambeau/Strand is still standing.

The January 13, 1970 Sentinel reported that the Universal Theatre building was undergoing demolition. E. M. Loew had operated the house until the late 1940s. In 1955, the theater was renovated and reopened by Francis A. Fasano, son of Mr. and Mrs. Michael Fasano, who had once operated the Cumings Theatre. Despite the new CinemaScope screen and projection equipment, the reopened Universal was not a great success, and Fasano closed the house for the last time in May, 1960.

One surprising thing in this article is the line “…a large pipe organ is being torn down with the building.” It was unusual for a disused organ to still be sitting in an old theater as late as 1970. Most of them had been either dismantled and parted out, or snapped up by collectors or churches by that time. I’ve found no other information about this lost organ.