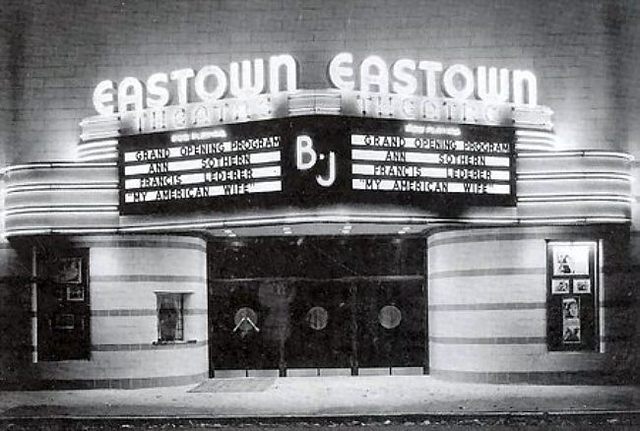 Opened in 1936 as the Eastown Bijou Theatre and later renamed the Eastown Theatre. Built for and operated byperated by B&J (Butterfield & Johnson) until it closed. Butterfield Theaters did the booking for the theatre.

An article about the new Eastown Theatre was published in Boxoffice of December 12, 1936. There are several photos. The Art Moderne design of the 1,000-seat house was by Grand Rapids architect Harry L. Colton. The Eastown was built for B&J Theatres (Butterfield & Johnson.)

Yes, it was, but they ran it in late 1982,or early 83, it was cold and snowy, I saw it there, uncut full edition. I was suprised that a theatre in consertive GR would play it. And it played about 3 weeks. I worked in a theatre in Hollywood in 1981 that ran Caligula exclusive for over a year. it opened in the fall of 1980. It also ran in Kalamazoo uncut full edition at the Campus theatre. midnight show 1000 seats all shows sold out. they kept it for 3 or 4 weekends.

I had a friend that lived just around the corner on Wealthy from the theatre. We walked over to see Caligula. We had a blast, I had seen it many times, this was his first viewing. He was shocked, horrified, and loved it.

Here is a fresh link to the first page of the 1936 Boxoffice article about the Eastown Theatre. The article continues on subsequent pages of the magazine (click on “next page” links above or below the right side of the page scans.)

Keep clicking a couple of pages past the article about the Eastown and there is an article about the Washoe Theatre in Anaconda, Montana, opened the same year. The pair provide an interesting example of the two streams of modern design during the 1930s: the ornate (and costly) Art Deco details of the Washoe, versus the elegant simplicity of the Eastown’s Streamline Modern style.

Actually, the Eastown Theatre did not become the “Eastown Bijou” until the early 1980s, when it was leased and managed by Merrill Rodin (owner) and John Yoder (GM), who were the operators of Grand Rapids' very first art film house, the Bijou Theatre (which opened in the 70s, and was located a couple blocks away on Lake Drive). After the Eastown’s heyday, which likely spanned from the 30s through the 50s, the Eastown had become a B-movie and second-run film house. By the 70s, it was known as a place to watch double-feature horror and martial arts films, and it had acquired a reputation of being in a “bad” part of town and prone to hold-ups at the box office and muggings in the men’s room.

In the early 80s, once Rodin and Yoder began running the Eastown as the Eastown Bijou, they introduced art films, second-run blockbusters like ET and Raiders of the Lost Ark, Saturday matinees of old classics, and special family events that featured movies like Bugsy Malone and The Wizard of Oz. Sadly, the Eastown Bijou was never a huge money maker — it was hard to fill a nearly 600-seat theatre! But the new operators were dedicated to bringing the magic of of the movie theatre to what was then a somewhat culturally-starved city.

In the mid-80s, the Eastown Bijou finally closed it doors, and it hasn’t been an operable movie theatre since. It went through a couple of incarnations as night clubs — the 50s themed Shout was a hit for a while — and it is now a church.

I’m Merrill Rodin’s daughter, and I have many indelible memories of sitting in the projection booth, stuffing my face with popcorn, and watching Raiders of the Lost Ark for the twentieth time (or having my mind blown at 11 years old, watching Liquid Sky, or — yes — the X-rated version of Caligula). The Eastown Bijou was staffed with great employees and film buffs, many of whom are still friends. And the theatre itself was beautiful and immense… and some even claimed it was haunted.

That wonderful place holds many, many stories and much history…

I worked at the Eastown in the mid 1980s just prior to the remodeling effort that Mr. Rodin and John Yoder undertook to make it the Eastown Bijou. Prior to that a much much smaller theatre nearby was used for small art and foreign films. It was hoped that those films plus an ambitious and eclectic selection of movies could be better served in the bigger theatre. I believe it was a long run of the movie “Caligula” that, in part, made the remodeling a possibility! Before that the big theatre was used for second run action and horror films, midnight movies and kung foo martial arts movies.

While, as Jenny recalls, it was hard to fill the house, the kids matinees we had on the weekends almost always filled the place up. I remember doing an introductory bit in front of a theatre full of kids and their parents and being surprised when they talked back to me, in unison, after I said ‘Hello’. I think the parents had as much fun as the kids. We started that series with a screening of a newly reconditioned copy of “The Wizard of Oz”. I had never seen it on a big screen. What a thrill.

The screen WAS huge and I feel extremely fortunate to have been able to see “Blade Runner” there dozens of times, as well as a Hitchcock series that included “Rear Window”, “Vertigo” and “Rope”. You’ve never seen “Rear Window” unless you’ve seen the kiss between James Stewart and Grace Kelly on a huge screen. Also of note on that big screen was the cult film “Koyaanisqatsi”, shown the way it was meant to be seen.

By the way, the air cooling system, which must have been state-of-the-art when it was built, was an amazing artifact of pre-air conditioning days, with a huge fan and a maze of tunnels you could walk through that exchanged and blew the air through the theatre. It worked very well on hot days.