Previous Names: Aztec on the River 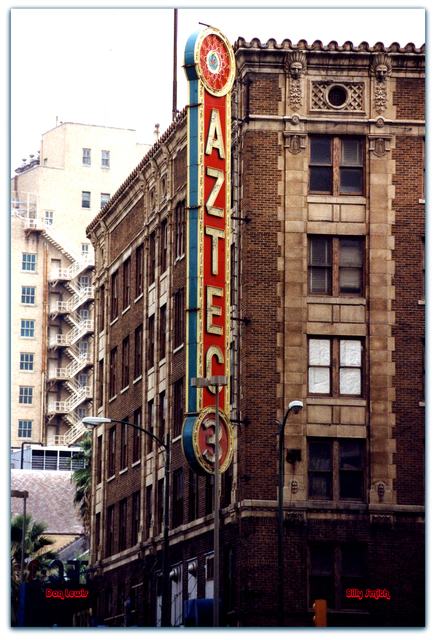 The Aztec Theatre was designed by the firm of Meyer & Holler, best known for their set of theatres built for Sid Grauman in Hollywood, the Egyptian Theatre(1922) and the Chinese Theatre(1927).

The Aztec Theatre could originally seat 3,000 when it first opened on June 4, 1926. As its name implies, it was extravagantly and quite exoctically decorated in the Meso-American style (or at least a Hollywood version of it), both in its temple-like auditorium and collonaded lobby.

The centerpiece of the lobby was a three-ton chandelier, two stories tall and twelve feet wide, hailed as the largest in Texas.

In its early years, the Aztec Theatre featured stage shows, including chorus girls, a 26-piece orchestra, an 11-rank Robert Morton (restored by Ed Gaida in 1958), and motion picutres (not long after the theatre opened, it switched to sound, starting with John Barrymore’s "Don Juan" in 1927.)

Though the theatre remained highly popular for many decades, by the 1970’s, it was in decline. On July 2, 1971 it was cut into three auditoriums as the Aztec Triplex, but this only slowed the eventual. In 1989, the Aztec Theatre was closed, and that same year, the theatre was added to the National Register of Historic Places, which helped save it from demolition.

After sitting vacant and falling into disrepair for years, the theatre was acquired by the city of San Antonio in the late-1990’s, and plans were put in place to transform the former movie palace into a showplace along the city’s popular River Walk.

Now known as Aztec on the River, a mixed entertainment venue and retail/restaurant area, the theatre was restored to its 1920’s appearance, the auditorium re-converted into a single screen.

Along the Commerce Street side of the building, rows of stores and eateries overlook the River Walk.

Aztec on the River opened to the public in 2007, however it closed on December 18, 2007, for construction work and anticipated reopening in Spring 2008. This date was put back to Spring 2009, and was further delayed, with a reopening in late-2009 with the San Antonio Rose Show, featuring Country music. This show was still playing in March 2010. The Aztec Theatre was closed by the summer of 2012, but had reopened by 2014.

Alamo Drafthouse could make it one of their flagships.

The newspaper today, states that the company renting the theater, has bought it. Meaning more of the same performance/shows. Some acts are obscure. Apparently, it is doing well, or the renters wouldn’t have “gone for it.”

My Mom was from San Antonio and she spent many a happy Saturday watching movies at the Aztec. She talked about it’s spectacular interior. I thought she said it had a huge indian statue inside. Is that still there and is that true? I’ve seen a few old pics of the interior. I’m so glad it’s reopened. I wish I lived closer to come see it open!

If you look at the current site, there is a photo of a large statue – more like an Aztec god, I think.

Wider, brighter version of the 1954 photo added. Courtesy of the AmeriCar The Beautiful Facebook page

I spent a day photographing the Aztec in March 2019 courtesy of Live Nation. You can see all the photos, plus the historic documents and theatre history I pulled together, at historictheatrephotos.com/aztec.

It’s too bad so many wonderful theaters have stopped showing movies. I saw Dr. Zhivago back in early 1967, while I was in combat medic training at Fort Sam. It was a memorable Sunday afternoon I still recall to this day.

They have live music and stand-up shows there mostly now.