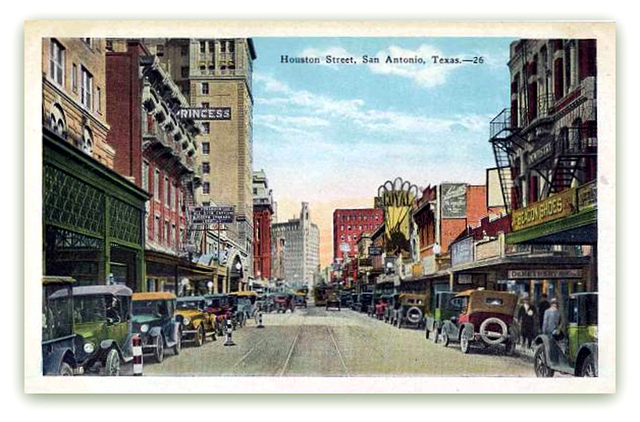 I thought your Texas Theatres might be under the INTERSTATE Circuit in Dallas,but none were listed.I will keep looking.

This page, from the San Antonio Theaters: Now and Then website, indicates that there was a Prince Theatre (not a Princess) (formerly the Strand and New Strand) on Houston Street that operated as such from 1936 until 1969: http://www.satheatres.com/Prince_Theatre.php. There is no Princess theater listed on the site.

San Antonio Theatres: Now & Then does have a page for the Princess Theatre. It opened in 1912 as the Orpheum and was renamed the Princess the following year, operating under that name until it closed in 1929. Then it was either remodeled for use as a department store (according to the San Antonio Theatres web site) or razed and the department store built in its place (according to a note in a book called “Saving San Antonio” by Lewis F. Fisher.)

The web site has three photos, and a drawing by the theater’s architect, Atlee B. Ayres. The address was 215 E. Houston Street.

Thanks, Joe; I do not know how I missed that.

The February 2, 1924, issue of Exhibitors Herald had a photo of the entrance of the Princess Theatre.

From the early 1900s a view of Houston Street along with the Princess & Royal Theaters in San Antonio. Thank you Joe for helping Mr Walczak find his way.