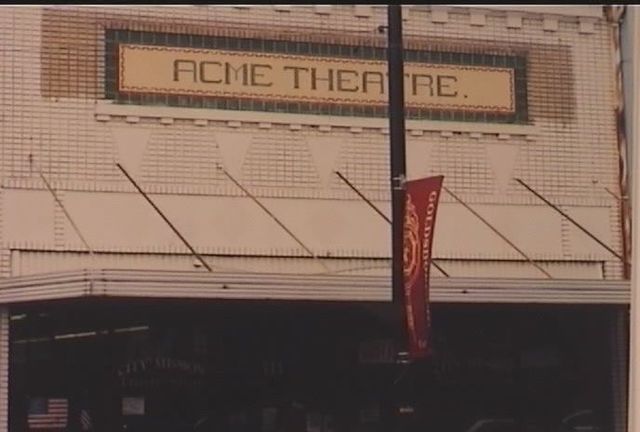 Opened as the Acme Theatre on August 17, 1916. It operated until around 1928. Operated for many years in retail use, it reopened in the early-2010’s as a live performance space.

Looking at the photos at the top of both the Variety (Center) Theatre and Wayne Theatre pages, I agree with vbridgers that the Wayne, Center and Variety theaters are all the same building. This page should be combined with the Variety’s page and a separate page be created for the Acme Theatre when information on that venue is found.

vbridgers is correct. Now that we have a photo of the Wayne Theatre, it clearly was not in the old Acme building at all, but in the building that housed the Center Theatre and later the Variety Theatre.

Here is the Acme Theatre’s page at DocSouth’s Going to the Show collection. It operated from about 1914 to about 1928, and must have always been called the Acme.

Looks like this was restored and reopened in 2012 as rehearsal space and space for small productions.

The 1920 Robert-Morton pipe organ from the Acme is now located in a private residence in Maine. It is a two manual four rank instrument.

The Acme Theatre on S. Center Street Goldsboro, N.C. was never a movie theatre. It was live shows.

The “Motion Picture Supplement” of the 1921 Cahn guide lists the Acme Theatre, Goldsboro, as a 500-seat house showing “R.&P” (Road shows and Pictures.) The stage was 55 feet wide and 26 feet deep, with a height of 35 feet, which was on the small side for a road show house, but Goldsboro only had a population of 11,296, so it couldn’t be expected to have supported a larger theater, or a full time stage house.

There are multiple mentions of the Acme in moving picture trade journals of the period, including The Moving Picture World and Motography. For many years it was managed by H.R. Mason, who is mentioned in trade journals at least as early as 1908, as is the Acme itself. In 1918 Mason was also operating the Rex and Crystal Theatres in Goldsboro, as noted in an ad for Triangle Distributing Corporation’s moving picture service in the February 23 issue of Motography.

The March 26, 1912, issue of the Goldsboro Daily Argus ran an item noting that:

“Mr. H. R. Mason president of tho Great Southern Feature Film Company will personally present at the Acme Theatre Wednesday and Thursday this great feature picture that has brought forth undivided praise from the press and the pulpit of all Protestant denominations.”

The highly praised film that Mason presented was called A Victim of the Mormons, and a synopsis in the article reveals that it is about a nice Protestant girl who is sweet-talked by a Mormon preacher into going with him to Utah. Presumably she gets some sister wives out of the deal, but I guess the paper didn’t want to publish any spoilers.

Unfortunately, the history on the Acme’s web site has some inaccuracies, and they are at least partly my fault. If you check the comment I made on this page on November 5, 2010 (the very fist comment on the Acme) you’ll see that the current operators of the Acme copied and pasted parts of their history from that comment. Part of their information probably also came from our original description of the Acme, contributed by Chuck sometime before November 5, 2010.

Our original description said that the Acme was the same theater as the Wayne, but from the later comments by vbridgers and NightHawk1 we were able to determine that the Acme was not the same house as the Wayne. The description has been corrected, and we now know that Wayne Theatre was the original name of the house that later became the Center Theatre and was last known as the Variety Theatre. The Acme was not listed in the 1928 Goldsboro directory, and probably closed around that time, when new, better equipped theaters were being opened.

The opening year is a bit problematic. Historic sources indicate that there was an Acme Theatre operating in Goldsboro at least as early as 1908, but I haven’t been able to determine if it was at 111 S.W. Center Street or somewhere else. In 1916, the house was either moved to a new building at 111 S.W. Center, or the old theater at that location was rebuilt and expanded. I’ve been checking the sources available to me and will post the information as soon as I can find something about it.

My apologies to everyone using the site for my part in perpetuating the earlier misinformation posted on this page. Cinema Treasures strives to provide accurate information, but when much of the information is crowdsourced, and is pieced together from diverse, often fragmented sources on the Internet, some errors are likely to creep in.

After doing a bit more digging, I now suspect that the Acme Theatre at 111 S.W. Center Street was built in 1916, and prior to that the Acme Theatre name was used in at least two other locations. One was in the Messenger Opera House block, from which H.R. Mason moved his operation in September, 1908, according to an item in the September 17 issue of the Goldsboro Daily Argus. A 1908 Sanborn Map shows the ground floor center bay of the Opera block, 152 S.E. Center, occupied by “Moving Pictures”.

The next location of the Acme is just a guess, but a 1913 Sanborn map available from Doc South’s “Going to the Show” site shows two buildings occupied by “Electric Theatres,” one being at 145 S.W. Center and the other at 121-123 W. Walnut Street. No other movie theaters appear on that map. According to the 1917-18 Goldsboro City Directory, 121 W. Walnut was the location of H.R. Mason’s Crystal Theatre, so I would guess that the house at 145 S.W. Center was, prior to 1916, the Acme.

111-113 S.W. Center were occupied by two small storefronts on the 1913 map, 111 being a confectionery and 113 a music store. On the 1918 map both lots are occupied by a much deeper single building housing the Acme (listed on the map only as “Moving Pictures”.)

Various issues of The Music Trade Review from 1916 note a new theater being built at Goldsboro by H.R. Mason, one item specifically calling it the Acme. The project was also noted in the April 15 issue of Motography. An advertisement in the August 17, 1916, issue of the Goldsboro Daily Argus read “The New Acme Opens Tonight 7:30 P.M.”

While the 1928 Goldsboro directory does not list the Acme Theatre, it does list the Mason Theatre, operated by H.W. Mason, at 137 S.W. Center Street. This house, which later became the Paramount Theatre, was most likely Mason’s replacement for the Acme.